Iraq | A hot to very hot air mass is rushing towards the country as of Thursday, and temperatures will touch 40 degrees in Baghdad. 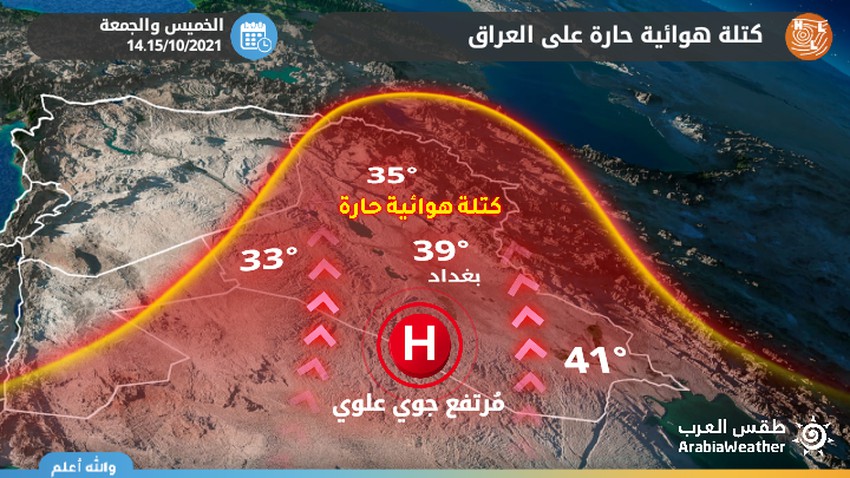 Arab Weather - The latest output of the numerical weather models processed by the Air Operations Department at the Arab Regional Weather Center indicates that Iraq was affected from Thursday and during the day by a hot to very hot air mass associated with a low extension of the Red Sea, so there is an additional rise in temperatures to be higher than their rates Much more than this time of year, and its rates may exceed 7-6 degrees Celsius.

It is expected, God willing, that relatively hot to hot weather will prevail in the northern regions during the next two days, with the exception of the high northern mountainous heights, while it will be hot to very hot in the central and southern regions, including the capital, Baghdad.

Temperatures range between the beginning and mid-thirties in the northern and central regions, while touching the end of the 30s in parts of the central and southern regions, including the capital, Baghdad, and may exceed the 40-degree barrier in parts of the southern regions, coinciding with a rush of moisture in the middle and high layers of the atmosphere, where it appears Medium and high clouds in some areas.

With the country affected by the hot air mass, night temperatures are expected to rise increasingly during the night of Thursday / Friday and the night of Friday / Saturday, so that the weather becomes relatively hot in general, turning to become pleasant to warm at the late night hours and dawn, with the exception of the high northern mountainous heights .

Northwesterly, easterly to southeasterly light to moderate winds are expected, sometimes active in some areas and working to raise dust and dust, especially in the southeast regions.