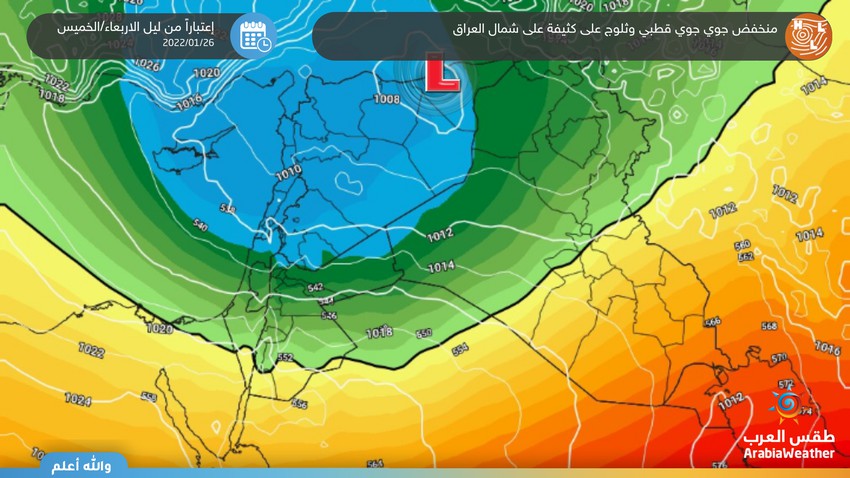 Arab Weather - The latest output of the numerical weather models processed by the Air Operations Department at the Arab Weather Regional Center indicates that Iraq was affected by a very cold polar air mass, starting from Wednesday night / Thursday and for several days associated with rain and snow for the northern and western regions sometimes.Details

It is expected, God willing, that there will be a rise in temperatures on Wednesday in various regions to touch 20 degrees Celsius in the capital, Baghdad, while temperatures will decrease in the western regions, and the weather will be very cold in the northern highlands, cold in the western regions, and unusually mild in the rest of the regions With the appearance of clouds at different heights, especially in the northern regions, there is a possibility of showers of rain and snow on the northern peaks in the afternoon, and the winds will be westerly to southeasterly moderate in speed, sometimes active.

The approach of the polar air mass on Wednesday/Thursday night

The polar air mass approaches Iraq with the night hours of Wednesday/Thursday, where there is a sharp drop in temperatures and the weather is very cold in the northern highlands, and very cold in the rest of the regions, and the amounts of clouds increase and rain falls on the northern regions, intensifying after midnight, and it is in the form of snow Over the high mountainous heights, and sometimes the rains extend to the western regions and form snow over parts of those areas, especially at the border crossing with Jordan.

Winds will be northwesterly to southeasterly, moderate in speed, active at times, and accompanied by strong gusts, especially in the western regions.

Polar air front, and precipitation deepens and intensifies in the northern regions on Thursday

The Arab Weather Center expects that the northern regions of Iraq will cross on Thursday, especially with the late morning hours, noon and during the day, a polar air front that is pushed behind by very cold polar winds, so there is a significant drop in temperatures, especially in the western and northern regions, and the weather becomes bitterly cold in the northern highlands. It is very cold in the north and west of the country, while it is relatively cold to cold in the rest of the regions.

The polar air front begins to cross in the northern regions during the day on Wednesday, pushing large amounts of rain clouds, and showers of rain fall on the north of the country. The rains are sometimes heavy and accompanied by heavy showers of hail, coinciding with the crossing of low clouds touching the surface of the earth working to form thick fog.

Coinciding with the occurrence of a noticeable intensification of the surface wind speed to be westerly to southwesterly moderate to active speed, accompanied by strong gusts touching the 100-meter barrier in the western regions and causing dust and thick dust.

Snow over the mountainous heights of more than 700 meters in the north, and rare snow showers in western Iraq

With the crossing of the polar air front and the flow of polar winds in the layers of the atmosphere in a way that allows for strong snowfalls, it is expected, God willing, that the heavy and accumulated snow will fall over the northern mountainous heights, whose height ranges between 700 to 800 meters above sea level, on Wednesday.

It is also expected, with will, that the opportunity will remain for the occurrence of intermittent snow and rain in the western regions of Iraq.

With the Thursday/Friday night hours, heavy rain and heavy hail continue to fall on the northern regions, with heavy and accumulated snow falling over the northern mountainous heights, but with a decrease in the level of precipitation to about 700 meters extending below that sometimes, coinciding with the crossing of low clouds touching the surface The ground leads to the formation of thick fog.

With the deepening of the influence of the polar air mass in the central regions, the weather forecast staff at the Arab Regional Weather Center is expected to deepen the influence of the very cold polar air mass and be stationed over Iraq on Thursday/Friday night, leading to the flow of cold northwestern winds as temperatures drop sharply and tangibly to become Temperatures are below zero degrees Celsius in large areas of western and northern Iraq, and the roads are still wet, which leads to the formation of a large-scale ice wave over those areas. The ice formation includes internal and external roads in cities, which poses a real danger when walking on the roads, while the rest of the areas witness severe weather. Cold and temperatures are very low, reaching only 3 degrees Celsius in the capital, Baghdad, while they are slightly higher in the southern regions.

This and God knows best and highest

Iraq | Increasing the effect of the hot air mass Thursday and Friday, and the temperature touches 40 degrees Celsius in Baghdad