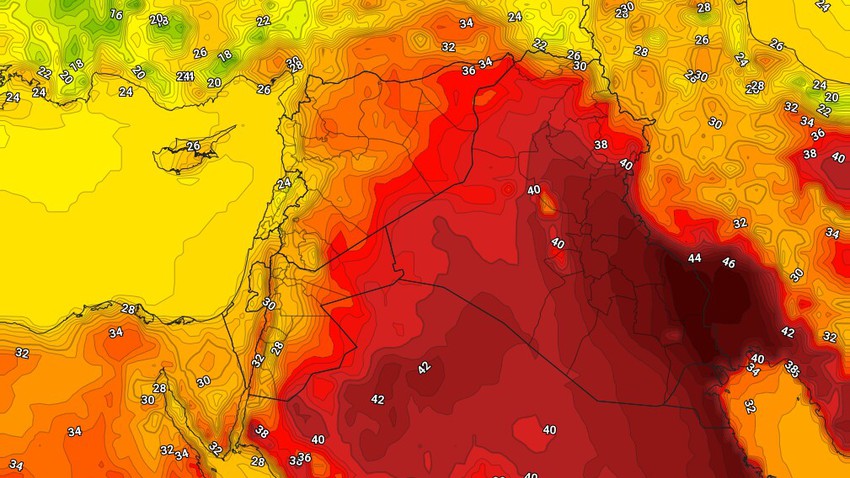 Arab weather - there is a rise in temperatures on Monday, and the weather is hot to very hot in all regions of Iraq, and temperatures are at forty levels in most regions, with the appearance of some clouds at medium and high altitudes, and active northwest winds continue to blow over the regions Southern.

They are accompanied by severe flashes approaching the 100 km/h barrier, which causes the formation of dust waves and sand storms, with continued alerts of the danger of low and lack of horizontal vision, and alerts of the risk of low horizontal vision to large levels, and perhaps its lack in some periods, and patients are advised Respiratory system and eyes by taking the necessary precautions to avoid complications, God forbid.

On the other hand, the winds will be northwesterly to southeasterly, moderate in speed, active at times over the rest of the regions.

Nice weather in the western regions at night

Night temperatures drop in the western regions as a result of the rush of northwesterly air currents, so that the weather in those areas is nice and refreshing, especially with the late night hours, while the weather in the rest of the regions is relatively hot, and the winds are variable in direction to northwesterly moderate speed and accompanied by active flashes. It raises dust and dust in the southern and western regions.

See the details of the weather in your area for 14 days through the Arab Weather application, download it now .

Iraq | A little rise in temperatures on Wednesday, and a chance of rare showers of rain that may reach Baghdad