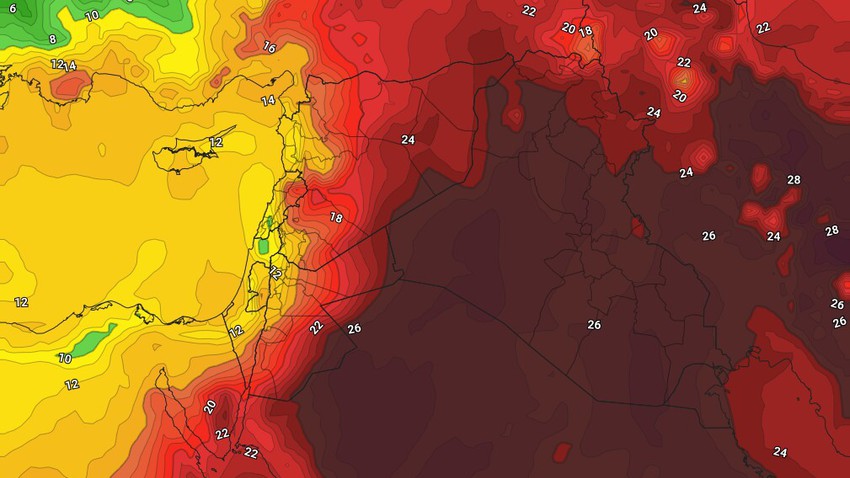 Arab Weather - A remarkable rise in temperatures occurs on Sunday, far exceeding their rates relative to this time of the year, and the weather is generally hot with the exception of the northern highlands, and very hot in the central and southern regions and temperatures are close to the 40-degree barrier in the capital, Baghdad, with the appearance of clouds At different altitudes, thunderstorms of rain may occur in narrow and random geographical ranges, and the winds in the west and southwest of Iraq will be south to southeasterly moderate for speed activities and are accompanied by strong gusts, especially in the western regions, causing the formation of dust waves in those areas and causing dust in the southwest of the country. The winds will be variable in direction and light in speed over the rest of Iraq.

There is also a rise in night temperatures and the weather becomes relatively hot in the central and southern regions, and warm in the rest of the regions, with the exception of the northern highlands, with the continued appearance of clouds at different heights and the opportunity remains for showers of rain in some random areas, and the winds are light east to southeasterly. For moderate speed, it is sometimes active in western Iraq.

Iraq will be affected by a fifties of air depression on Monday, which causes the warm air mass to deepen and the weather becomes hot to very hot in general, with the exception of the northern highlands, and temperatures exceed the 42 ° C barrier in the capital Baghdad, with clouds continuing to appear at different heights and thunderstorms are possible The rains are in random areas, and the winds will be westerly to southwesterly moderate for speed activity and are accompanied by strong gusts that exceed the 70 km / hour barrier, which leads to agitation of dust and dense dust and the formation of dust waves in some areas.

There is also a decrease in the night temperatures compared with the previous nights, and the weather is warm during the night hours in various regions with the exception of the northern highlands, and it is relatively cold over the western regions due to being affected by an air mass with lower temperatures coming from the Mediterranean Sea, with the continued emergence of clouds at altitudes. There may be different thunderstorms and showers of rain are possible in random areas, and the winds will be northwesterly to southeasterly moderate, active sometimes over some areas.

For more details about the weather and the expected temperatures through the Arabia Weather application, download it now