Iraq | A slight drop in temperatures on Tuesday, and thunderstorms in random areas accompanied by downward winds 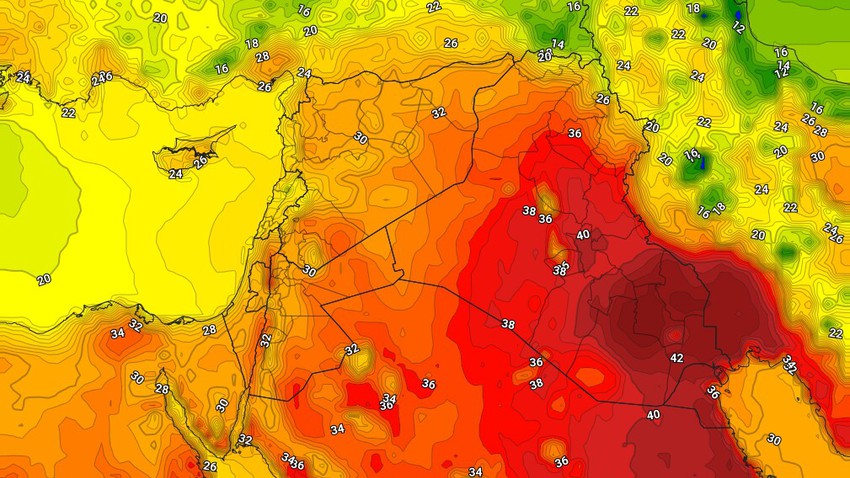 Arab Weather - There is a slight drop in temperatures in Iraq on Tuesday, while they remain higher than their rates for such time of year, and the weather is moderate in the northern mountainous highlands, hot in the northern and western regions, and very hot in the central and southern parts, including the capital, Baghdad, and the winds Volatile and light to moderate velocity, sometimes active in some areas.

Relatively hot weather during night hours over all regions of Iraq

The weather in the hours or night of Tuesday / Wednesday is relatively hot and annoying in various regions, it turns during the dawn hours to become moderate in the western and northern regions, but it remains relatively hot in the central and southern regions, and the weather is relatively cold in the northern mountainous highlands, due to the geographical nature that is distinguished In these areas, the winds are variable in direction and light to moderate speed, sometimes active in some areas.

On Tuesday, Iraq is increasingly affected by a state of atmospheric instability, so that quantities of clouds appear at medium and high altitudes during daylight hours, interspersed with some thunder clouds in random and dispersed areas, working on rain showers, and thunder clouds are accompanied by the blowing of the descending winds within the scope of their influence, This will cause dust waves and a decrease in the horizontal visibility, and Iraq will continue to be affected on Tuesday night by a state of atmospheric instability, so that the opportunity remains ready for thunderstorms of rain in random areas.

⚠️ Recommendations
1- The risk of dust waves forming within the influence of thunderstorms, which leads to a decrease in the level of horizontal visibility.