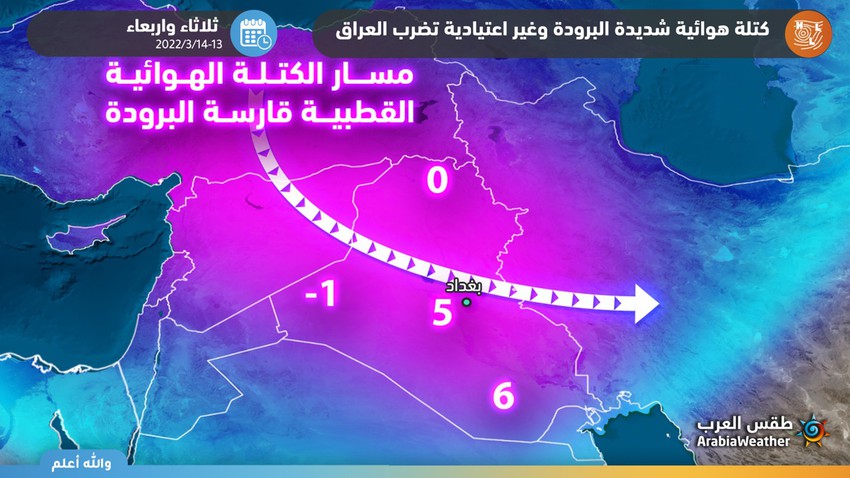 Arab Weather - The outputs of the numerical models received in the Air Operations Department indicate a rush of a very cold and polar air mass as of Tuesday and is stationed over Iraq, but it has a continental source and generally weak air efficiency.

Where the temperatures are expected to drop sharply and significantly to be much lower than their rates on Tuesday, and the weather will be a very cold day in the north and west of Iraq, tending to cold in the central regions, including the capital, Baghdad, and moderate in the far southern regions that are still far from the effects of cold winds .

The effect of the cold air mass deepens on Tuesday/Wednesday night, so temperatures drop sharply in all regions, to be below zero degrees Celsius in the northern and western regions, and around 6 degrees in the capital, Baghdad, and the weather is cold to very cold in all regions, with the possibility of frost formation And the occurrence of freezing in the northern and western regions.

Clouds will continue to appear at different altitudes, and the opportunity remains for showers of rain and snow to fall on parts of the far north of Iraq and the western regions.

The concentration of the cold air mass over Iraq on Wednesday

As for Wednesday, the effect of the very cold air mass deepens and is concentrated over Iraq, and the temperatures drop further, and the weather will be cold in most areas, and pleasant in the far southern regions.

With the appearance of clouds at different heights, the opportunity remains for showers of rain and snow in the far northern regions.

With the deepening of the impact of a very cold air mass on Wednesday/Thursday night, night temperatures are expected to drop further to be around below zero degrees Celsius in the western and northern regions and around 4 degrees Celsius in the capital, Baghdad, with high chances of frost formation and freezing, including agricultural areas.

It is expected that moderate to brisk northwesterly winds accompanied by strong gusts, especially on Tuesday, will raise dust and dust and raise dust levels in many areas.