Iraq and Kuwait | Al-Bawareh winds are unprecedentedly intense since the beginning of their season, and threaten the recurrence of dusty waves.Details 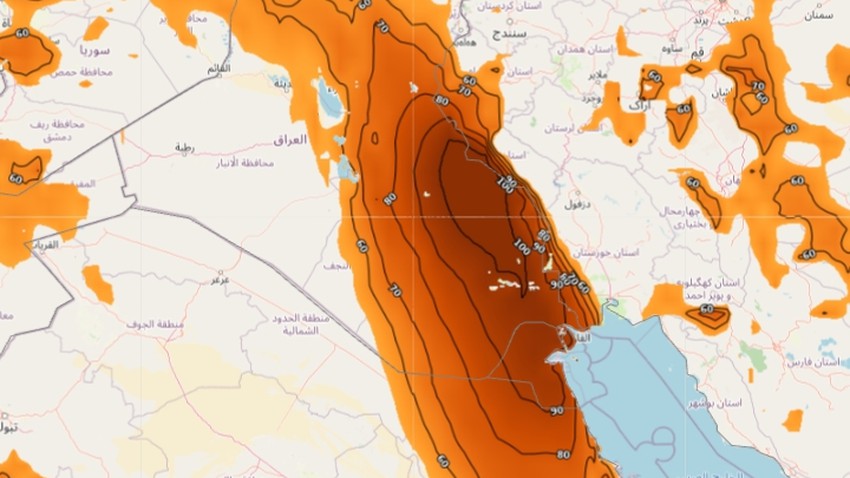 Arab Weather - The weather maps in the Arab Regional Weather Center indicate an increase in the speed of the northwest winds known locally as the Al-Bawareh winds on the southern and eastern regions of Iraq, reaching towards Kuwait on Monday and Tuesday, where the winds are moderate to active speed, accompanied by strong gifts ranging in speed Between 50 and 60 km/h, it works to raise dust and dust and may form dust waves from southern Iraq and its progress towards Kuwait, which causes an escalation in the proportions of dust in the atmosphere and the prevalence of dusty atmospheres of varying intensity, and the wave rises to about 80 cm in the shores of the port of Basra and the beaches of Kuwait.

The depth of the temperature depression over Oman warns of a significant increase in the speed of the Al-Bawareh winds, starting from Wednesday

It is expected, God willing, that a shallow air-thermal depression will deepen over the Sultanate of Oman, which will increase the atmospheric pressure differences between the Mediterranean Sea, Eastern Europe and the Arabian Peninsula. -50 km/h, which is accompanied by donations ranging between 60 and 90 km/h, especially in eastern Iraq.

This results in the formation of very dense dust waves starting from the south and east of Iraq directly towards the State of Kuwait, causing a significant decrease and possibly a lack of horizontal visibility, and strong winds cause sand creeping phenomenon in desert roads.

The waves are turbulent in the coasts of Basra port and the coasts of Kuwait, reaching a wave height of more than a meter at times.