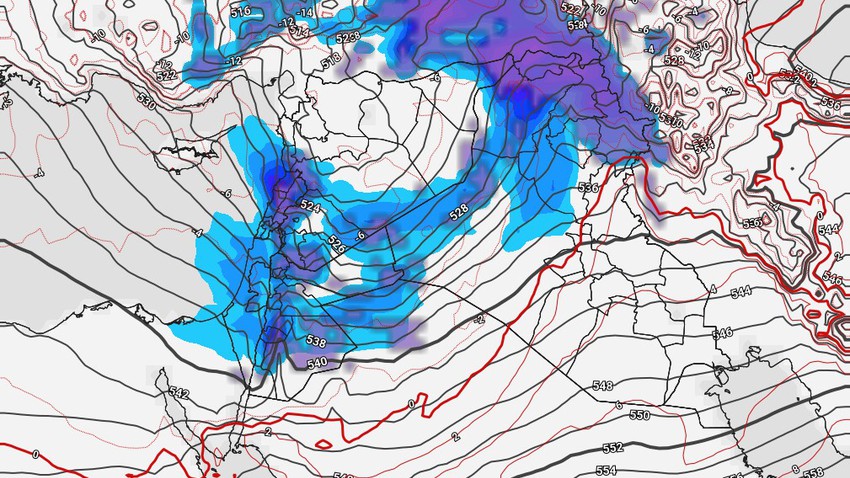 Arab Weather - The outputs of the numerical weather models processed by the Air Operations Department at the Arab Weather Center indicated that a new, frigid polar air mass rushes towards Iraq, starting from Wednesday, working to renew heavy snowfall.Details

It is expected, God willing, that the very heavy and accumulated snow will fall over the northern mountainous heights on Wednesday, including Sulaymaniyah, Kirkuk, Mosul and Erbil, in a way that hinders the manifestations of public life again.

It is also expected that the opportunity will be created again for areas in western Iraq to witness snowfall during Wednesday evening, the snow will be accumulating according to the intensity and continuity of precipitation, and it includes, including, the western humid areas such as Mahfoor Al-Jundi, and it also includes desert roads such as the Baghdad International Road, in addition to the Trebil border crossing. Snow expected on the west is considered rare because these areas are not accustomed to receiving snowfalls.

Clouds will continue to appear at different altitudes in the north, and showers of rain and hail will fall on the areas. Snow will continue to fall over the northern and northeastern mountain heights on Thursday as a result of the remnants of the cold air front that crossed later, and snow continues to fall in the north until midnight Thursday / Friday before the chances of snowfall disappear after that.

In light of the expected weather conditions, the Arab Weather Center advises the need to pay attention to the danger of falling and accumulating heavy snow, the occurrence of road closures and impeding the manifestations of public life in the exposed areas