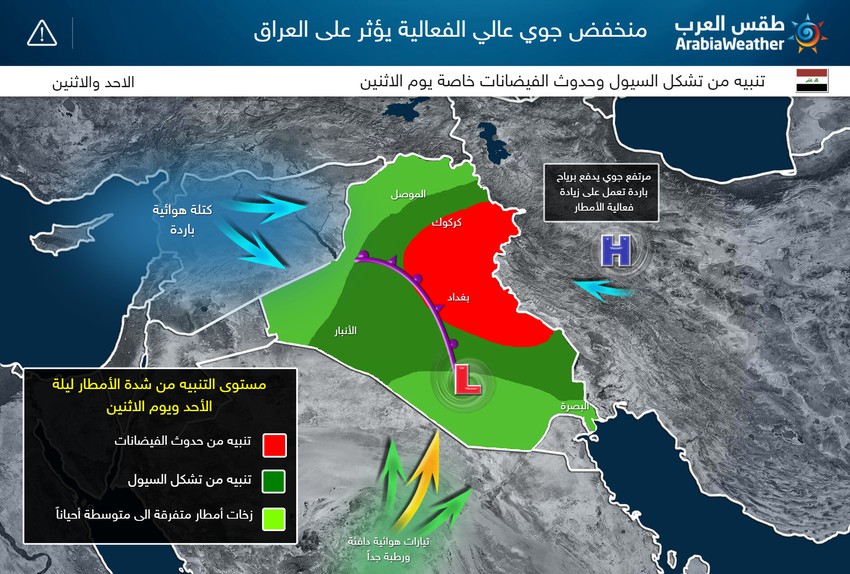 Iraq .. Low air starts on Sunday evening and alert of the formation of floods and the occurrence of floods on Monday

Arab Weather - Eng. NASSER HADDAD - Iraq is affected by a state of atmospheric instability Sunday afternoon and evening, intensifying with the hours of the night in conjunction with the development of a strong low-effective air depression on Monday amid serious warnings of the danger of floods and the formation of floods, especially the central and southeast.

In the details, the weather disturbances resulting from the extension of the Red Sea low from the southwest towards Anbar with the hours of Sunday afternoon, gradually extending towards Ramadi and Karbala, and then arrive with the evening hours of Baghdad, Najaf, Fallujah and Kut, and during the late night hours, the rain widens to Diyala and Samarra And Saladin and Kirkuk.

And showers of rain, God willing, on those areas, sometimes become heavy with the evening and night may include Baghdad, and is associated with the occurrence of thunder and thunderstorms, especially in the central and southwestern regions.

On Monday , the weather is evolving by a low air burst in the high atmosphere towards Iraq, and the characteristics of the Red Sea depression are changing, becoming a frontal depression with a closed air front, forming a heavy rain sometimes on central areas including Baghdad, Karbala, Diyala, Kirkuk and Najaf. And penalty.

The following map shows the total rainfall expected until dawn on Tuesday,

Therefore, the Arab weather warns of the danger of the formation of torrential floods and flooding in some of these areas, and advised to stay away from the floods and away from low areas because of the possibility of rising water levels.

Overnight and Monday night, the depression is moving south-east towards Basra, so the chances of rain are high and sometimes heavy on Kut and Basra, while the weather gradually stabilizes in Baghdad and the whole west and southwest of the country.