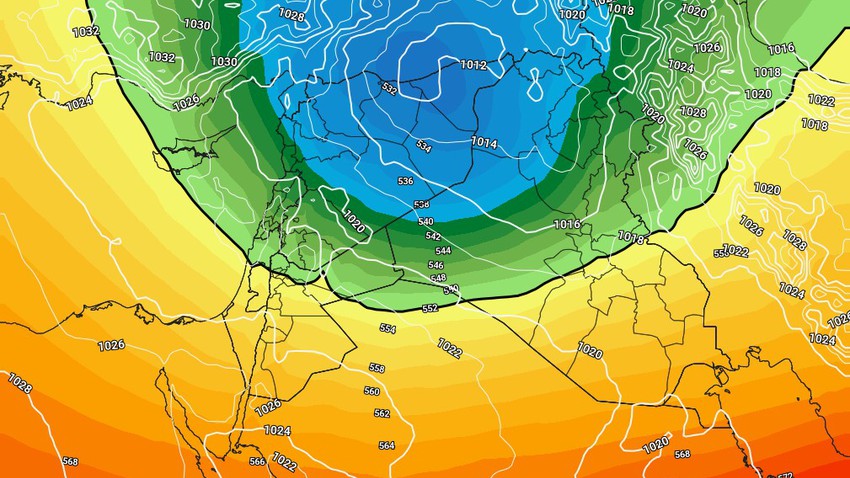 Arab Weather - The outputs of the numerical air models outputs processed by the Air Operations Department at the Arab Weather Regional Center indicate the continued control of a strong air altitude in important regions of the European continent, which leads to the continued rush of the very cold air mass towards the region during the coming days.

According to the outputs of the numerical weather models, a very cold air mass rushes towards the region through Turkey and is centered over the Syrian territories and later over Iraq, where an air depression is formed, centered in the north, and a cold air front crosses from the afternoon and afternoon hours of Wednesday and during the evening hours, so that temperatures remain below their rates for such The time of the year, and the weather is cold with the appearance of clouds at different altitudes, especially in the north

Rain and hail fall in different areas of northern Iraq, and snow falls on the high mountainous heights, accumulating and obstructing the aspects of public life.

With moderate to brisk southwesterly to westerly winds accompanied by strong gusts of dust and dust, especially in the western regions.

Clouds will continue to appear at different heights on Wednesday/Thursday night, with showers of rain and hail falling over different areas of the north of the country, possibly extending to the capital, Baghdad. Precipitation was available.

Ice and freezing are formed in the northern and western regions as a result of temperatures dropping below zero degrees Celsius.

Continuation of precipitation in the north on Thursday, and a large-scale freezing wave at night

Precipitation continues in the form of snow over the northern high mountains.

The impact of the cold Siberian polar winds deepens again on the country on Thursday/Friday night, and temperatures drop sharply to below zero degrees Celsius in large areas of the country with the formation of ice and freezing in various regions and roads.

The Arab Weather Center will inform you of more details and developments about the chances of snowfall and the places exposed to it.