Iraq | Severe weather fluctuations await the country, starting from Wednesday, and for several days, and the dusty weather is the prominent feature. 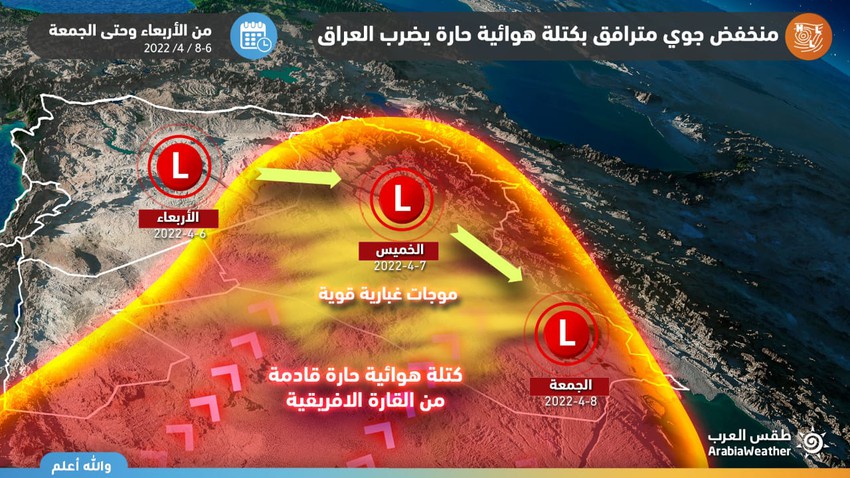 Arab Weather - The latest outputs of the numerical models received at the Arab Weather Center indicate that Iraq was affected by a shallow air depression accompanied by a relatively hot to hot air mass as of Wednesday, so there is a rise in temperatures and the weather is relatively hot to hot in various regions, and pleasant over the northern mountains , coinciding with the spread of large amounts of clouds at medium and high altitudes.

A little drop in temperatures Thursday

The hot air mass intensified on Friday, and the temperatures exceeded the mid-thirties

God willing, it is expected that the hot air mass will intensify on Friday, so temperatures will re-rise in all regions, and the weather will be pleasant in the northern mountains, and hot in the rest of the regions with the spread of amounts of clouds at different heights.

It is expected that the maximum temperatures will exceed the mid-thirties Celsius in many regions in Iraq, especially the central and southern regions.

It is expected that there will be a difference in night temperatures in most regions of the country, where the weather will be warm to hot in most areas during the first night hours of Thursday/Friday night and Friday/Saturday night, and the weather tends to be moderate with the late night hours and dawn, and temperatures are in the twenties in many areas.

Strong winds and dust waves, especially in the western regions

Mild to brisk southwesterly winds accompanied by strong gusts will blow over most of the western regions to the northern regions on Wednesday, causing dust and dust and possibly dusty waves. Also, it is not excluded the movement of dust waves transmitted from eastern Jordan and Badia al-Sham to northern and western Iraq.

On Thursday, the direction of the wind turns to northwesterly moderate to brisk, and the weather will be dusty in many areas with varying rates.

According to the initial indicators, it is expected that a noticeable intensification of the intensity of the winds will occur on Friday to be active in speed and accompanied by severe flashes that exceed the 70 km/h barrier, especially in the western regions. And the Levant desert to many areas of Iraq, which leads to a significant decline in the extent of horizontal visibility, and may reach the point of non-existence.

Chance of rain showers in the northernmost regions

According to the initial indicators, it is not excluded that cumulus clouds will form over the northernmost areas, especially the mountainous areas, from Wednesday and for several days, so that sporadic and muddy showers of rain are likely in random geographical ranges, rain may be accompanied by thunder sometimes.