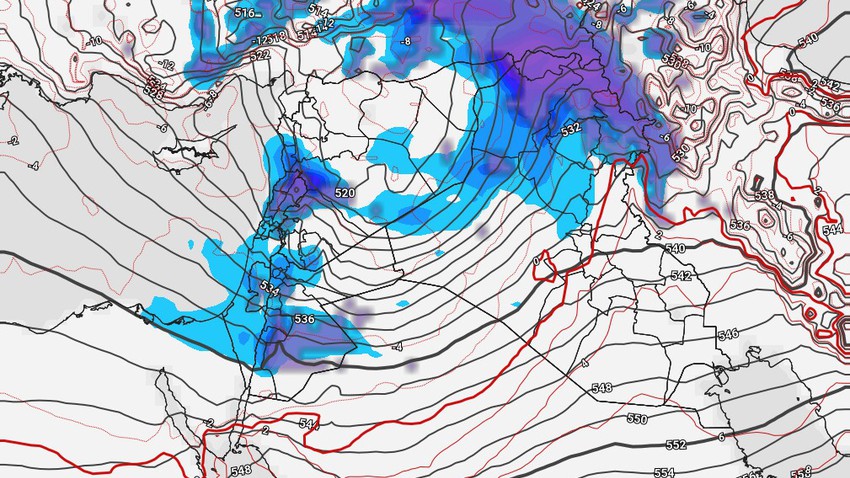 Arab weather - God willing, during the night hours of Wednesday / Thursday, it is expected that the crossing of the cold air front will move to the central and later northeastern regions, and heavy rains and heavy hail will continue to fall on the northern regions, with an intensification of snowfall and the occurrence of more accumulations over the northern mountainous heights , while rainy clouds also move to the central regions, including the capital, Baghdad, with the crossing of the cold air front, where showers of rain and hail fall on central Iraq, and the effect of the concentration of precipitation will later move to the northeastern regions.

The chance of snow showers over the western regions remains, coinciding with the crossing of low clouds and touching the surface of the earth, leading to the formation of thick fog.

Winds will be northwesterly to southeasterly, moderate in speed, energizing at times and accompanied by strong gusts of dust and dust.

The weather forecast staff at the Arab Regional Weather Center is expected to deepen the impact of the new, very cold Siberian polar air mass to be centered over Iraq on Wednesday/Thursday night, which leads to the flow of cold northwestern winds, as temperatures drop sharply and significantly to become below zero degrees Celsius in Large areas of western and northern Iraq and the roads are still wet, which leads to the formation of a large-scale ice wave over those areas. The ice formation includes internal and external roads in cities, which poses a real danger when walking on the roads, while the rest of the areas witness very cold weather and temperatures are very low. It reaches only 6 degrees Celsius in the capital, Baghdad, while it is slightly higher in the southern regions.