Iraq | Temperatures around 50 degrees Celsius in the capital, Baghdad, on Monday 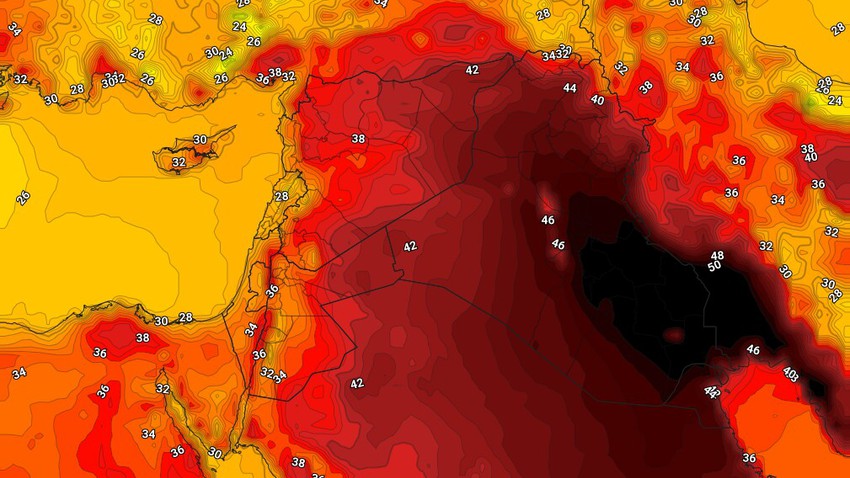 Arab weather - there is an additional rise in temperatures, to be higher than their normal rates for this time of the year by about 6 degrees Celsius, and the weather is very hot and exhausting in all regions, with the appearance of clouds at medium and high altitudes.

Temperatures record record values of around 50 degrees Celsius over many regions of Iraq, especially central and southern ones, including the capital, Baghdad.

The winds will be northwesterly active, with strong gusts that exceed the 70 km/h barrier over the central and eastern regions, and they stir up dust and dust, which are not excluded from being thick at times, while the winds are volatile in the rest of the regions and light to moderate in speed. Sometimes.

A clear rise in night temperatures on Monday/Tuesday night

More rise occurs on night temperatures, and the weather in the northern highlands and western regions is relatively hot, and the weather is very hot in the rest of the regions, and temperatures are at the end of 30 degrees Celsius over many areas, with the appearance of amounts of high clouds.

The winds will be variable to northwesterly, light to moderate in speed, active at times over some areas, especially eastern ones, and are dusty.

See the details of the weather in Iraq for the next five days via the detailed bulletin.

Iraq | Sunday/Monday night will be relatively cold in some areas, unusually for this time of the year