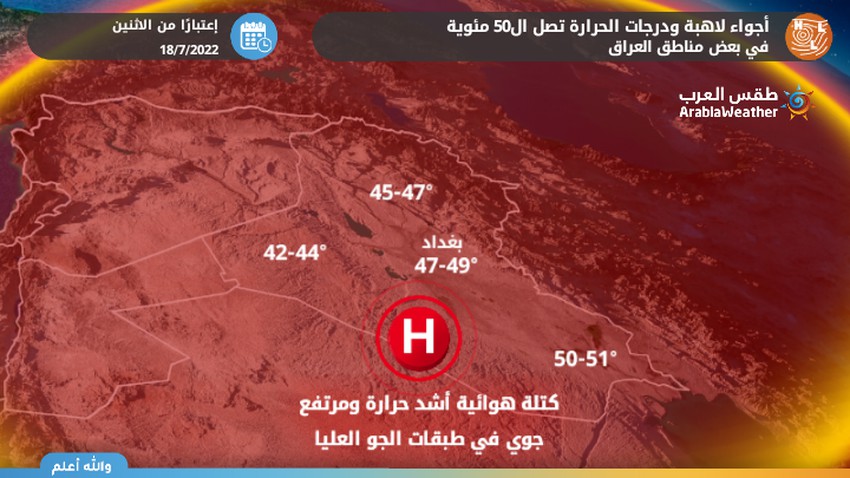 Arab Weather - The latest updates of weather maps in the Arab Regional Weather Center indicate that Iraq is affected by a hotter air mass that begins on Monday and intensifies on Tuesday and Wednesday, during which temperatures may reach record levels.Details

As of Monday, the Republic of Iraq is affected by a hotter air mass with a flaming center accompanied by a tropical air rise in the upper layers of the atmosphere (thermal seasonal air depression near the surface of the earth), so that another rise in temperatures occurs in all regions, especially with the middle of the week and they are higher than their rates By several degrees Celsius.

And the weather turns to be hotter than before and flaming in all regions, particularly during the noon and afternoon periods, especially in the central and southern regions.

It is expected that the maximum temperatures during the influence of the air mass will be the hottest:

Western winds continue to blow on the northwest, moderate speed, sometimes active, especially in the afternoon and afternoon, and they are accompanied by strong gusts that raise dust and dust and may work to form some local dusty waves, specifically on the northern, central and southern regions, and lead to low horizontal visibility.

It is expected, God willing, that night temperatures will tend to rise further, especially in the middle and south, and the weather will be very hot and annoying over all areas during the night hours.