Iraq | The brunt of the heat subsides in the middle of the week, and temperatures drop in conjunction with the advance of dust waves from Badia al-Sham 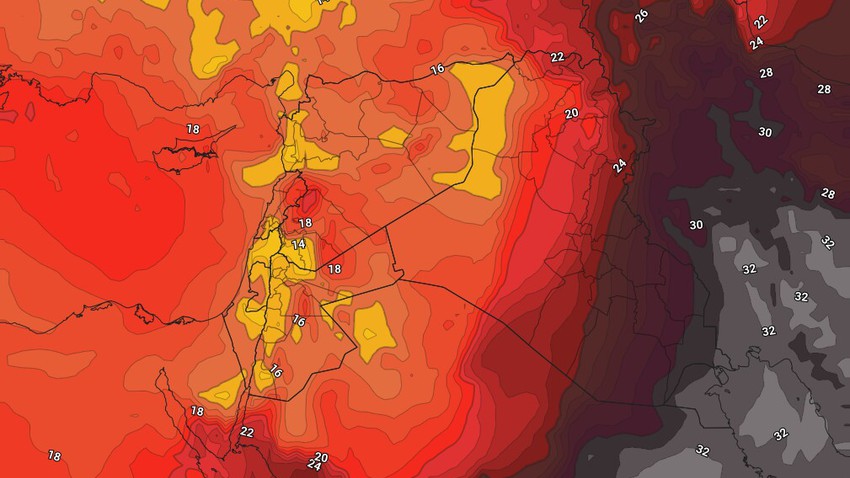 Arab Weather - The latest output of the numerical models processed by the Air Operations Department at the Arab Regional Weather Center indicates the rush of an air mass with lower temperatures towards the Levant, which leads to a decrease in temperatures in various Iraqi regions and cities, especially the western ones, as of Tuesday, and it will be The weather is hot to very hot in the western and northern regions, and very hot in the rest of the central and southern regions.

It is expected, God willing, that there will be a further decrease in temperatures on Wednesday to become slightly below their averages for this time of the year, and the decrease will be more pronounced. The weather will be hot in the western, northern and central regions, and very hot in the rest of the southern regions, but less sharply than the previous days.

Dust waves on Tuesday and Wednesday

On Tuesday, Iraq will be affected by active westerly to northwesterly winds that move a dust wave transmitted from Badia al-Sham, starting from the northern and western regions, passing towards the central and southern regions, and leading to a decrease in the horizontal visibility. , works to raise dust and dust locally and form dust waves in those areas.

(Plan properly for your daily work without dust surprises.. The solution is from here)

With the night hours of Tuesday/Wednesday, a new wave of dust rushes, which may be more intense than the previous one, and it begins its impact on the northern and western regions at late times of the night, and extends with the early morning hours of Wednesday towards the central regions, including the capital, Baghdad, and continues its way the rest of the day towards the regions The southern part of Iraq, where the weather is dusty in many areas, and there is a noticeable decrease in the range of horizontal visibility.

The weather tends to be temperate with weekend nights

Night temperatures decrease with the nights of the middle of the week and the weather is relatively hot to hot in the early hours of the night, but the weather will become nice at the late night hours and dawn in the western and northern regions, and it becomes more moderate in the central regions, especially with the night of Wednesday / Thursday, coinciding with the high Surface moisture levels and the gradual appearance of low clouds, especially to the west.