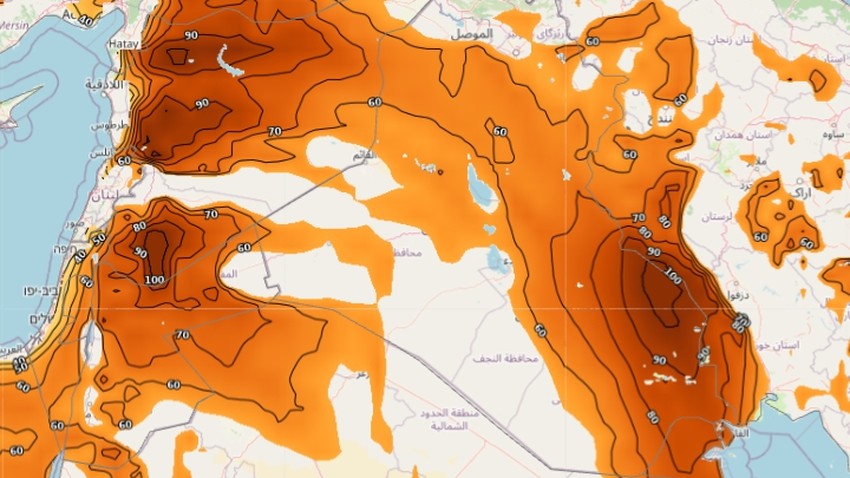 Arab weather - God willing, it is expected that the effect of the very hot air mass will decline from Iraq on Tuesday, so there is a clear change in the temperatures, but they remain about 3 degrees Celsius higher than their rates for this time of the year, and the weather will be hot in the western regions, and very hot in the rest of the year. There is a gradual increase in the proportion of dust in some northern and central regions, especially the southern ones, so that the weather becomes dusty to varying degrees.

Winds will be northwesterly to northwesterly, moderate in speed over many areas, sometimes active and working to move a dust wave transmitted from the Badia of the Levant, starting from the northern and western regions, passing through the rest of the regions. 65 km/h in the southern regions, and works to raise dust and dust, and waves rise on the shores of Basra port.

Another drop in night temperatures

There is another decrease in night temperatures compared to the previous nights, especially in the west, and the weather is hot in all regions during the early hours of the night, and the weather tends to be moderate in late times of the night in the northern and western regions, coinciding with an increase in surface humidity.

Winds will be northwesterly moderate in speed over many areas, active at intervals and lead to the movement of a dusty wave that may be more intense than the previous one, starting from the northern and western regions at the late night hours, reaching the central regions on Wednesday morning, and later reaching the southern regions.