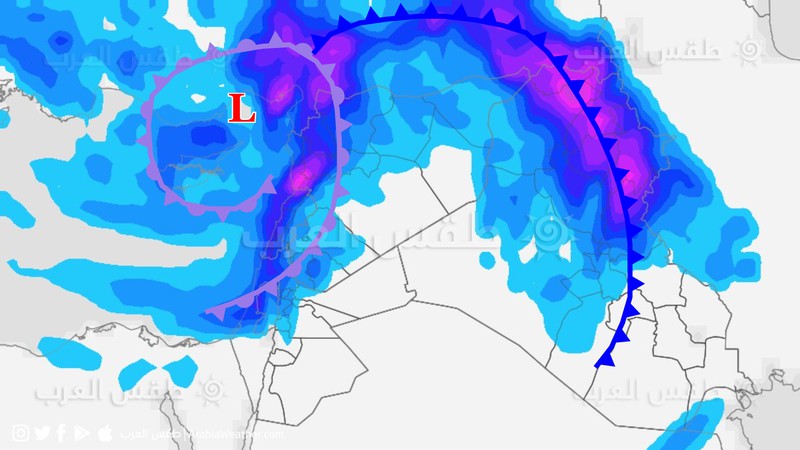 Arab Weather - weather maps in the Arab Regional Weather Center indicate that Iraq will be affected on Friday by an air depression, and Iraq will gradually cross a high-efficiency cold front, as temperatures drop clearly in the northern and western regions, and the weather will be relatively cold in those parts, and pleasant in the rest of the regions (warm in the south ), and amounts of clouds appear and showers of rain fall on different regions of the country, including the capital, Baghdad, sometimes extending to parts of the southern region, and the rains are heavy, especially in the northern regions, and are accompanied by showers of hail and the occurrence of thunderstorms sometimes, which causes the flow of valleys and the formation of torrents.

The snow falls heavily on the northern peaks of the towering mountains, especially in the border areas. These snows are accumulated, God willing.

Winds blow between southwest and southeast, with brisk speeds at intervals.

The effect of the depression continues on Saturday, with the rain concentrating in the north

The country continues to be affected by the depression on Saturday, but the frequency of unstable weather conditions recedes compared to what will be on Friday, with precipitation concentrated in the northern regions, and relatively cold weather prevails in the northern and western regions and is gentle in the rest of the regions, with showers of rain continuing in some northern regions. Parts of the western regions are affected, and the opportunity remains for showers of snow to fall over the tall peaks.

The winds will be southwesterly, brisk and accompanied by strong gusts in the western regions of the country.

Important recommendations from the Arab weather: