Iraq | The heat intensified on Tuesday, and temperatures touched the mid-forties in the capital, Baghdad 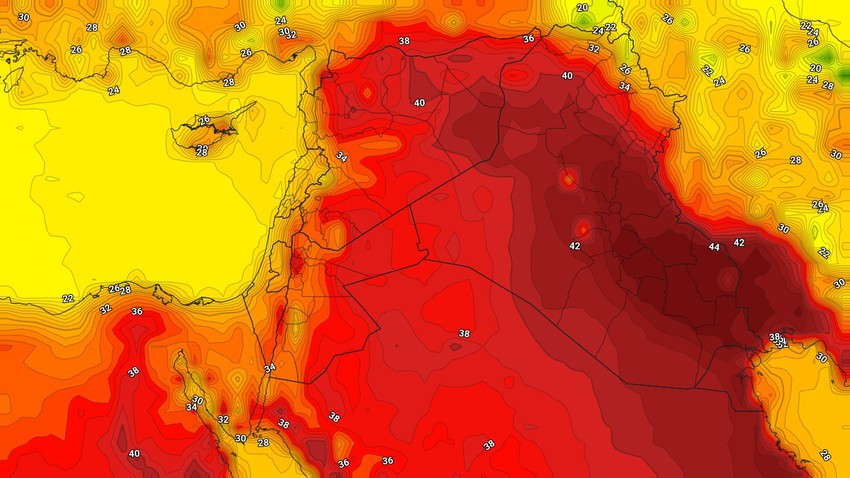 Arab weather - God willing, it is expected that Iraq will be affected by a hot to very hot air mass on Tuesday, so another rise in temperatures will occur to be much higher than their rates for this time of the year, and the weather will be hot to very hot in various regions, especially central and southern, coinciding with With the appearance of clouds at high altitudes over some areas, cumulus clouds are likely to form in parts of the northern mountains that may cause local thundershowers of rain.

The maximum temperatures are between the end of the thirties and the beginning of the forties Celsius in the northern and western regions, while they are around the mid-forties of Celsius in the central and southern regions, including the capital, Baghdad.

The winds will be northwesterly moderate in speed, gradually active especially during the noon and afternoon and work to raise dust and dust, especially in parts of the central and southern regions, and may work to reduce the extent of horizontal visibility.

Hot weather at night in many areas

There is an increase in nighttime temperatures compared to the previous nights, and the weather will be moderate to warm in the northern mountains, while it is hot and gloomy in the rest of the regions.

The winds are variable in direction to northwesterly, light to moderate in speed, sometimes active in some areas and working to raise dust and dust when active.