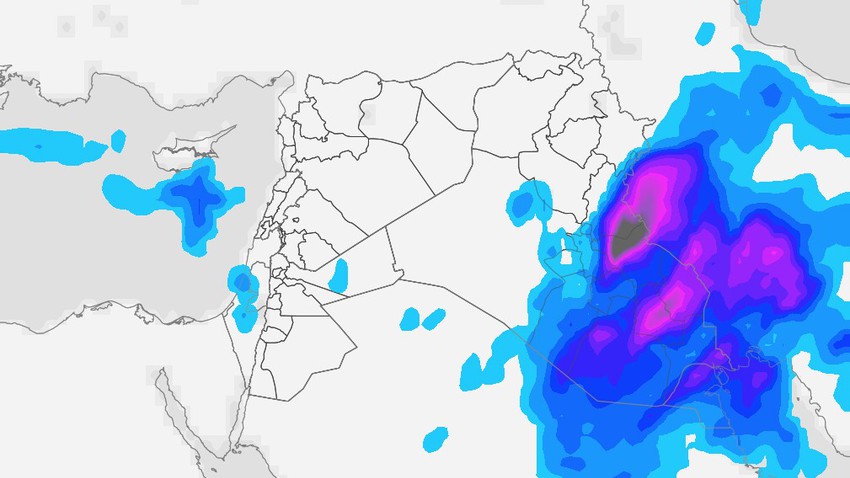 Arab Weather - Showers of rain fell in parts of the country, especially the southern ones, during the past two days in parts of the governorates of Basra and Muthanna, extending to parts of Dhi Qar and Nasiriyah, and according to recent air updates, the southern region extending to the center and east of the country on a date with a formation of clouds Thunderstorms with greater intensity and strength during the next two days until Sunday, God willing.

With the hours of Friday night and until Saturday morning, thunderstorms of rain are expected in the southern governorates of Basra and Muthanna, which will be moderate to strong, especially the hours of dawn, and are associated with the activity of the descending winds and form cold sometimes, as it extends with the hours of the day on Saturday towards parts of the center and north of the country around Baghdad, the capital Kirkuk, Mosul and its environs, God willing, will be of varying intensity.

The effect of unstable weather conditions increases with the hours of Saturday night until Sunday morning, as a result of the approach of a cold upper basin from the northwest of the region and an eruption of warm southern currents, which means more powerful thunderstorms, accompanied by the activity of the descending and exciting surface winds of some dust in the forefront of B, where it becomes more abundant and in parts A wide area in the south of the country near Basra and Muthanna and parts of Baghdad as well. It is accompanied by the formation of torrents sometimes, especially in valleys and low-lying areas, and the weather will gradually decrease with the hours of the day on Sunday, God willing.

The latest weather updates addressed indicate a good possibility of a new cold upper basin erupting from the northwest of the region, which means renewed unstable weather conditions and the return of thunderstorms with the beginning of next December and is associated with activity in surface winds and turbulence of the coasts overlooking the waters of the Arab Gulf, and we will send you more weather updates During the coming days, God willing, so we invite you to review the updates issued through the main website or mobile application and to know the weather conditions during the coming periods, God willing.