Iraq | The release of the forecast for Eid Al-Adha 2022 and dust is the prominent feature.Details 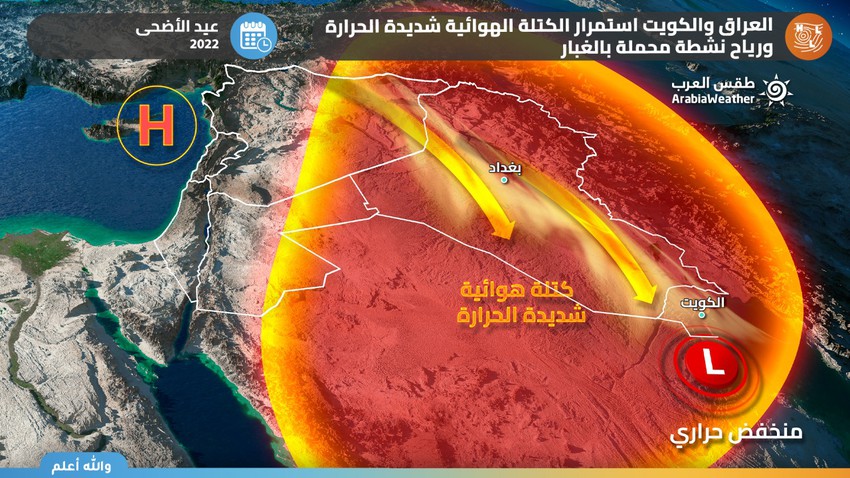 Arab Weather - The weather maps in the Arab Regional Weather Center indicate that Iraq will continue to be affected on the Day of Arafa and the first days of Eid al-Adha by the very hot air mass, so temperatures tend to rise slightly to be around slightly higher than their rates, and the weather is hot in the western regions, and very hot in the rest of the regions.

The maximum temperatures reach the end of the thirties Celsius in the western regions, while they are in the mid-forties to slightly higher in the rest of the northern and central regions, including the capital, Baghdad, while touching the end of the forties in the southern ones.

According to the initial indicators, it is expected that temperatures will tend to decrease on the second and third days of Eid (Sunday and Monday) to become lower than their rates for this time of the year. .

Northwesterly winds are expected to intensify amid warnings of rising dust

The weather forecast staff at the Arab Weather Center monitors an increase in the speed of northwesterly winds on the day of Arafa and during the blessed Eid al-Adha to be moderate to active speed and accompanied by strong gifts in many areas, including the capital, Baghdad, which leads to raising dust and dust and may form dust waves, so that it occurs A gradual and significant escalation in the proportion of dust in the atmosphere, and the weather will be dusty, amid alerts to respiratory and eye patients to pay attention and take the necessary precautions to deal with the dusty atmosphere.

Hot to sweltering nights during Eid