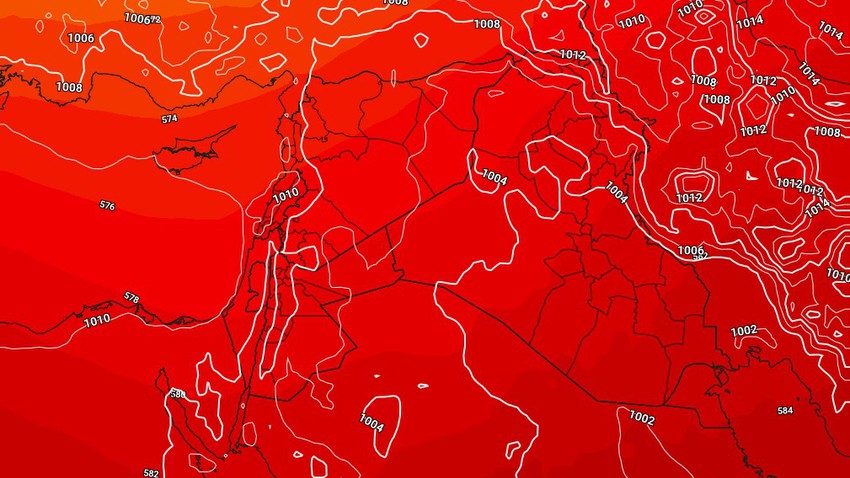 Arab Weather - There is an increase in temperatures on Wednesday to become higher than their rates for such time of the year, and the weather is warm in the northern mountainous highlands, and hot to very hot in the rest of the regions, so that temperatures exceed forty degrees Celsius in the capital Baghdad, with the emergence of clouds at medium altitudes And high, and the winds will be southwesterly to light southwesterly to moderate speed. They are sometimes active in some areas and raise dust when they are active.

Relatively hot weather at night in large parts of Iraq

The weather at night is relatively hot in all regions, with the exception of the northern mountainous highlands and the western regions, the weather is gentle, and the winds are light easterly to northeasterly, light to moderate speed, sometimes active in some areas.

Random thunderstorms and a weak chance to spread to the capital, Baghdad

On Wednesday, Iraq continues to be affected by a state of atmospheric instability, as quantities of clouds appear at medium and high altitudes interspersed with some cumulus clouds leading to thunderstorms of rain in random and dispersed areas, and there is a low probability of extending some rain showers towards the capital Baghdad , and opportunities are concentrated in The mountainous northern and northeastern highlands, with rain of varying intensity and accompanied by remarkable activity in the speed of the surface winds, which raise dust and dust within the influence of thunderstorms.