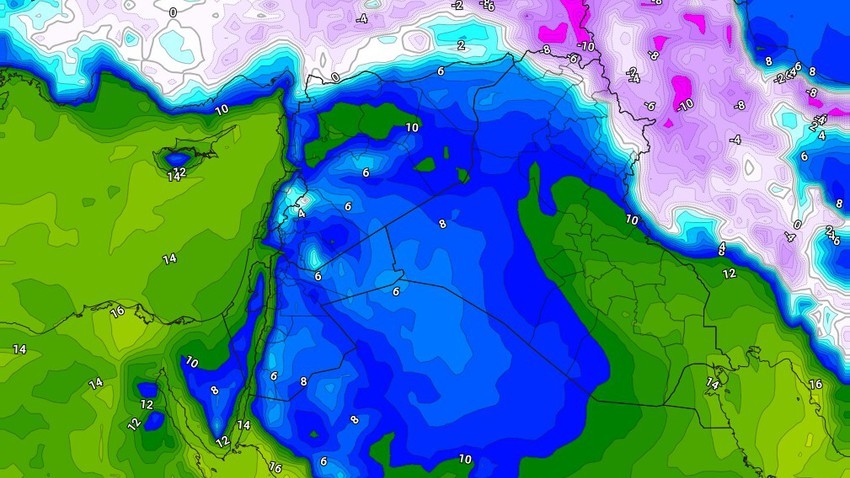 Arab weather - God willing, it is expected that the impact of the very cold Siberian polar air mass will continue on Iraq on Tuesday, as there is a slight rise in the measured temperatures, but it remains below rates for this time of the year, where temperatures range between 6 and 10 degrees in most regions. Iraq and it will be below zero degrees by several degrees in the northern mountains, and the weather will be very cold in the northern highlands, and very cold in the rest of the regions, with the formation of ice on the roads that witnessed snowfall, especially in the morning hours.

Clouds will continue to appear at different altitudes, especially in parts of the north of the country, and the opportunity remains for light showers of snow over the northern mountainous heights.

The winds will be variable, northwesterly, light to moderate, and may be active at times over some areas.

The Siberian polar air mass is moving further south and pushing freezing cold winds towards all regions of Iraq, where temperatures drop in all regions of the country to be below zero by about 15 degrees Celsius in the northern peaks, while they are about to below zero centigrade in the rest of the regions.

With the formation of frost and freezing in large areas of the country, and ice forming on wet roads, amid unusual weather that Iraq is witnessing, and Siberian polar temperatures with distinction for the third day in a row.

The winds will be southeasterly to southeasterly, moderate in speed, active at times and accompanied by strong gusts in the western regions.