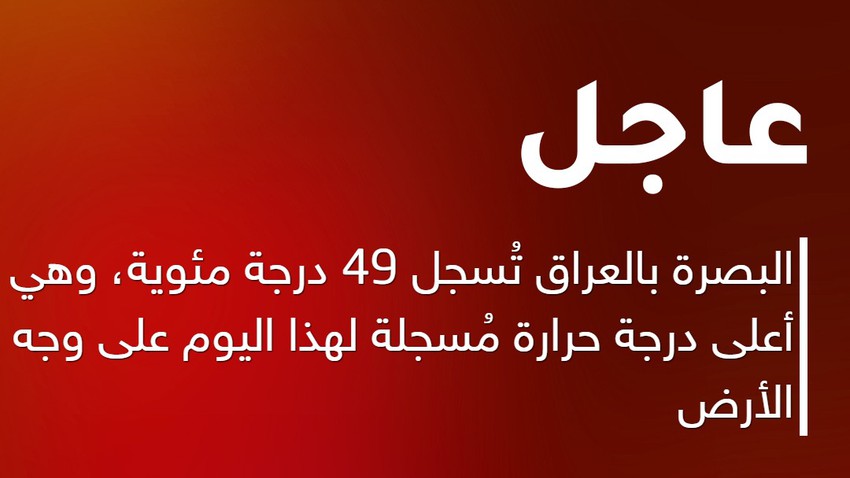 The weather of Arabia - Sinan Khalaf - It seems that the summer flames have already started with direct influence on a number of countries bordering the Arabian Gulf, specifically those that have been known to record temperatures touching the 50 summer months, such as Iraq, Kuwait and Saudi Arabia, these three countries recorded temperatures It is considered the highest for today, Tuesday 2/6/2020.

In the details, Basra airport in southern Iraq recorded at noon today, Tuesday, temperatures considered the highest on the face of the earth today, reaching 49 degrees Celsius.

The King Fahd International Airport in Dammam also recorded the second highest temperature in the world today, reaching 48 degrees Celsius, it was recorded on Tuesday noon.

Also, some areas of Kuwait, singers and Jahra in Kuwait recorded temperatures of 47 degrees Celsius.

What is the highest temperature recorded in the world in history?

The highest temperature recorded in the world was 58 ° C in the Aziziyah region of Libya in 1922, but the World Meteorological Organization (WMO) ruled out the reading to be correct and its documentation was canceled as the highest temperature recorded in the world, after   An investigation conducted in 2012, the World Meteorological Organization concluded that the record of Aziziyah measurement may be inaccurate by up to 7 ° C due to a combination of factors including the asphalt-like surface on which the measurement was made, which does not reflect a fair representation of the desert soil The original. Which made it nullify the eligibility of the record the most weather temperature measured in the world, which was registered in the name of Azizia, which was awarded the title of the warmest region in the world!

The highest real registered temperature recorded in the world

But what is the lowest temperature recorded in this world, you can find more details on this topic in the article of the coldest region in the world , and more information about weather numbers and its facts in an index of numbers on the weather .