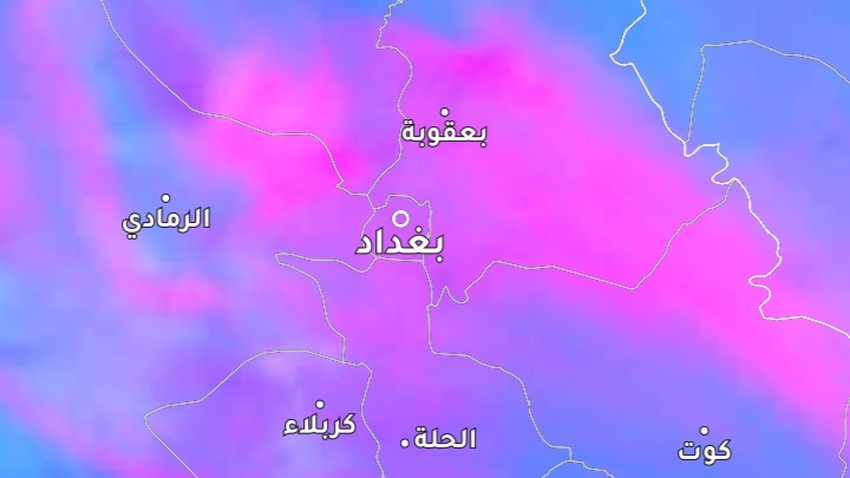 Arab weather - The capital, Baghdad, like other regions of Iraq, is still under the influence of a dense dust wave that arose in the morning and its effects are still continuing so far, but with its intensification remarkably, as the latest airport observations recorded the maximum horizontal visibility of only about 300-400 meters.

At the same time, the southeastern, eastern and northern areas of Anbar Governorate are still exposed to dust waves of varying intensity, amid an increase in dust rates, which negatively affects the horizontal visibility and the clarity of the air.

Active winds continue for the next hours

According to the processed computer outputs, it is expected that moderate to brisk northwest winds will continue in the coming hours, accompanied by strong gusts that raise dust and dust waves, so that the weather remains dusty in many areas.

It is expected, after God’s will, that Iraq will continue to be affected on Monday by moderate to brisk northwesterly winds accompanied by strong gusts that will continue the formation of dust waves, especially in the western and central regions, including the capital, Baghdad, all the way to the southern regions, and this does not prevent the formation of some dusty waves in the northern regions. Amid the continuation of the recommendations that it is necessary to close the windows and pay attention to the risk of low horizontal vision, and patients with the respiratory system and eyes are advised to avoid leaving homes in light of the prevailing weather conditions.