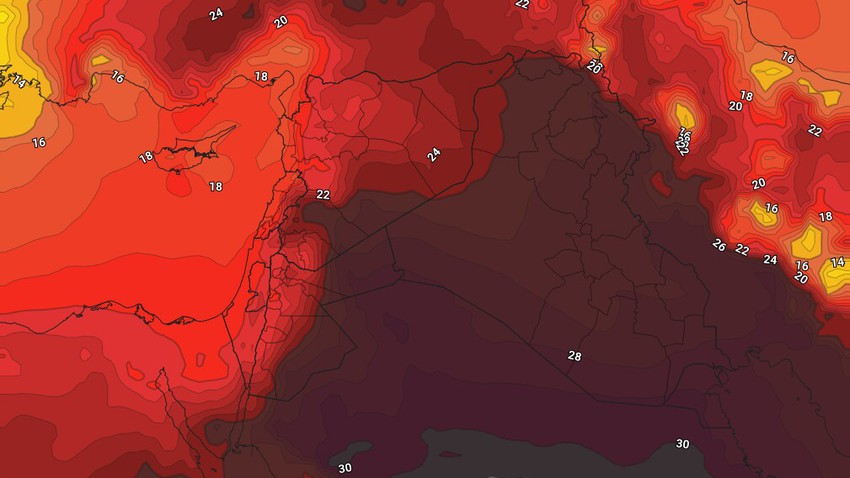 Arab Weather - God willing, it is expected that the weather in Iraq during the Happy Eid Al-Fitr will be hot to very hot in various regions, and the capital Baghdad records advanced forty temperatures, with some areas affected by a state of atmospheric instability through which thunder clouds actively accompanied by the speed of the surface winds Dust and dust-catching details

The temperatures continue to be higher than their average for such time of the year on Friday, and the weather continues to be hot to very hot in general, with the exception of the high northern mountain elevations, and clouds continue to appear at medium and high altitudes in some areas, and the winds are north to northwesterly moderate to speed, sometimes active in the regions. Central and Eastern, and the weather continues to be relatively hot to hot at night, and the winds are fluctuating and light to moderate in speed, active sometimes in some areas.

Active winds in the northwest on Saturday

The weather remains hot to very hot in general during the day with the appearance of some medium and high clouds in the eastern and northeastern regions, and the winds are northwesterly moderate for speed activity and accompanied by strong gusts that cause dust and dust, and the weather continues to be relatively hot at night with a retreat in the wind speed.

Chance of thunderstorm showers concentrated in the eastern regions

Clouds are expected to appear at medium and high altitudes on Thursday, as a result of which there is a possibility of thunderstorm showers of rain in random and limited parts accompanied by active winds that raise dust, and the chances of rain decline in most areas of Iraq on Friday and Saturday with their concentration in the northern mountainous heights and the eastern regions, so that The opportunity is ripe for thunderstorms of rain in parts of these areas, especially in the afternoon.