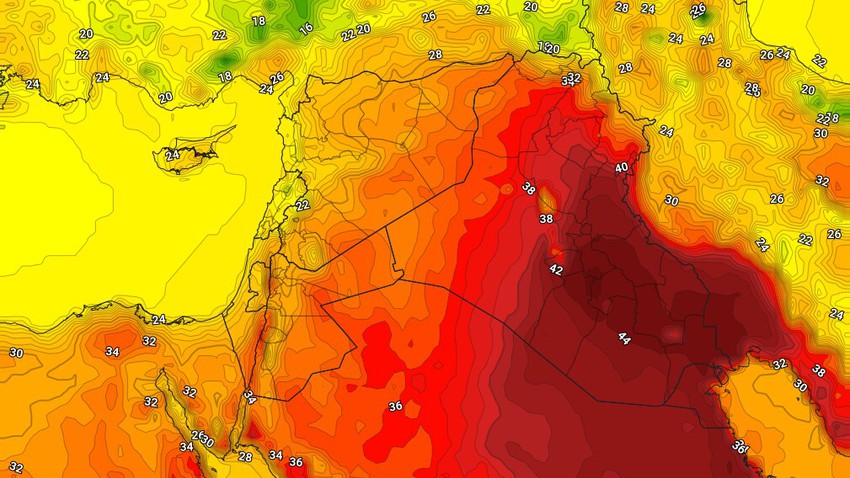 Arab Weather - The temperatures on Monday in Iraq remain higher than their averages for such a time of the year, and the weather is relatively hot in the northern highlands, and hot to very hot in the rest of the regions, especially the central and southern parts, so that the temperatures touch the mid-forties in those areas, with the emergence of The clouds are at medium and high altitudes, and there is a possibility of thunderstorms of rain in the northern mountain range, and the winds between the south and the west are light to moderate in speed, sometimes activating and being dusty and accompanied by strong gusts on the northern regions.

The temperatures drop at night, and the weather is pleasant in the western regions and the high northern mountainous elevations, while it is warm to relatively hot in the rest of the regions, especially the central and southern parts, and the winds are fluctuating in direction and light to moderate in speed, active sometimes in some areas.

⚠️ Recommendations
1- Drink lots of fluids regularly
2- Not to be exposed to sunlight for long periods, especially in the Jordan Valley and Dead Sea areas.
3- Not to leave children inside closed vehicles under the sun's rays.
4- Avoid placing pressurized and flammable containers inside vehicles, to avoid the risk of ignition.