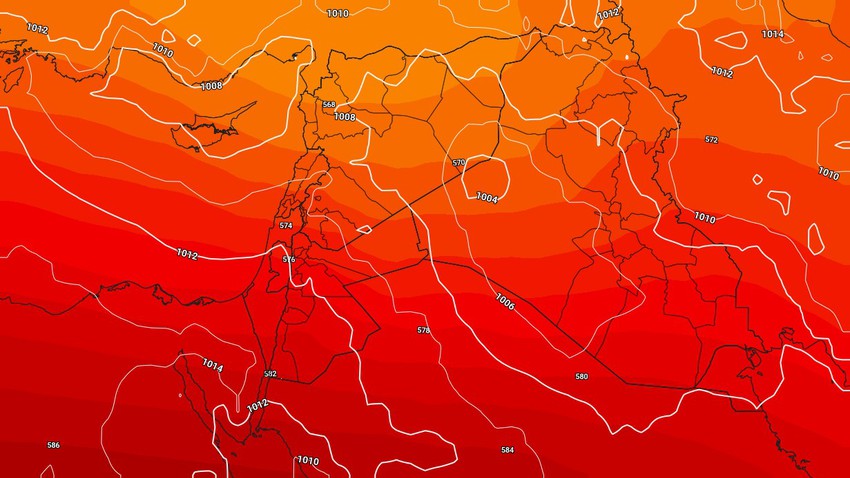 Arab Weather - The latest output of the numerical models processed by the Air Operations Department at the Arab Regional Weather Center indicates the approach of a five-year depression on Friday, so there is a rise in temperatures to be higher than their rates for this time of the year, and the weather is moderate in the northern mountains, and hot Relatively to hot in the rest of the regions, especially in the southern regions, and clouds appear at different heights in many regions.

It is expected, God willing, that Iraq will be affected on Saturday by a further rise in temperatures on Saturday, so that temperatures will remain several degrees Celsius higher than their averages for this time of the year, and the weather will be warm in the northern mountains, and relatively hot to hot in the rest of the regions, with the appearance of clouds. at different altitudes.

On Friday, Iraq continues to be affected by a state of atmospheric instability, as cumulus clouds multiply over separate areas of the country, which work on rain showers over different and scattered areas of the country, including the capital, Baghdad, accompanied by the occurrence of thunderstorms and active winds that raise dust and dust within the framework of The effect of thunderclouds, as it is not excluded that the rain will be heavy in narrow geographic ranges, which leads to the formation of torrential rains and the rise in the water level on the roads.

On Saturday, however, the impact of a state of atmospheric instability recedes from various regions, while it continues in the northern and western regions, where the opportunity is ripe for thunderstorms of rain in parts of the far north of the country, extending towards some western regions.

There is a rise in night temperatures during the Friday/Saturday night hours, and the weather is relatively cold in the northern mountains, and warm in the rest of the regions, especially in the central and southern parts during the early hours of the night. the southernmost regions.

Another rise in night temperatures will occur on Saturday/Sunday night, and the weather will be relatively cold in the northern mountains, warm to hot in the rest of the areas at the beginning of the night, but it will tend to moderate at the late night hours and dawn, especially in the northern and western regions.

Variable winds will blow over the country in the coming days

At the end of the week, variable winds in a light to moderate speed will blow over the country, sometimes active and working to raise dust and dust when active.