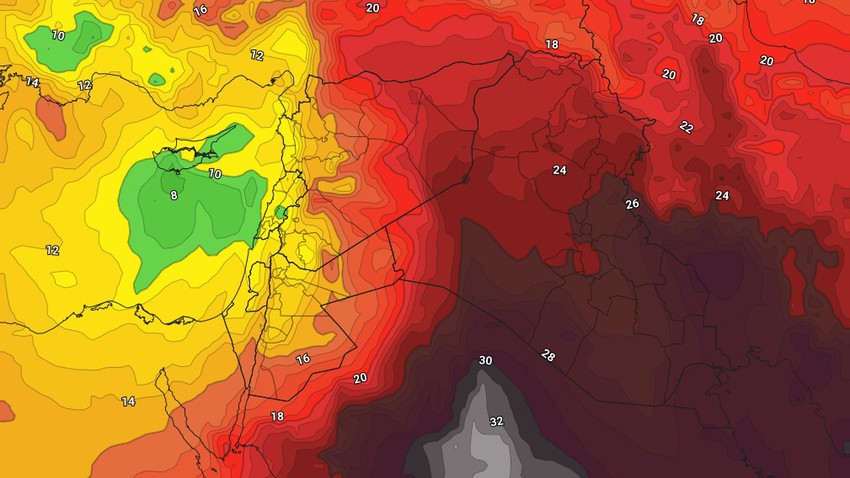 Arab Weather - The latest output of the numerical models processed by the Air Operations Department at the Arab Regional Weather Center indicates that Iraq will continue to be affected on Friday by the hot air mass, so temperatures remain at their highest rates for this time of the year, and the weather is warm in the northern mountains, and relatively hot to hot In the northern and western regions, and very hot in the rest of the regions, coinciding with the dispersal of clouds at medium and high altitudes, and the opportunity remains for some local precipitation on limited parts of the northern mountains in the border areas.

It is expected that temperatures will be between the early and mid-30s in the northern and western regions on Thursday and Friday, while touching 40 degrees Celsius in the central regions, including the capital, Baghdad, while touching the mid-forties in the far southern regions.

The effect of the hot air mass declines on Saturday and a decrease in temperatures occurs to become around their rates for this time of the year, and the weather is warm in the northern mountains and western regions, while it is hot in the northern and central regions, and very hot in the southern regions, with clouds dispersed at altitudes medium and high.

On Friday and Saturday, moderate winds will blow over Iraq from northwest to northwest, starting from the western regions, passing through the rest of the regions.

But on Saturday/Sunday night, the night temperatures drop, and the weather is relatively cold in the northern mountains, while it is warm in the early hours of the night, turning to gentle in many areas and becoming more arresting in the southern regions.