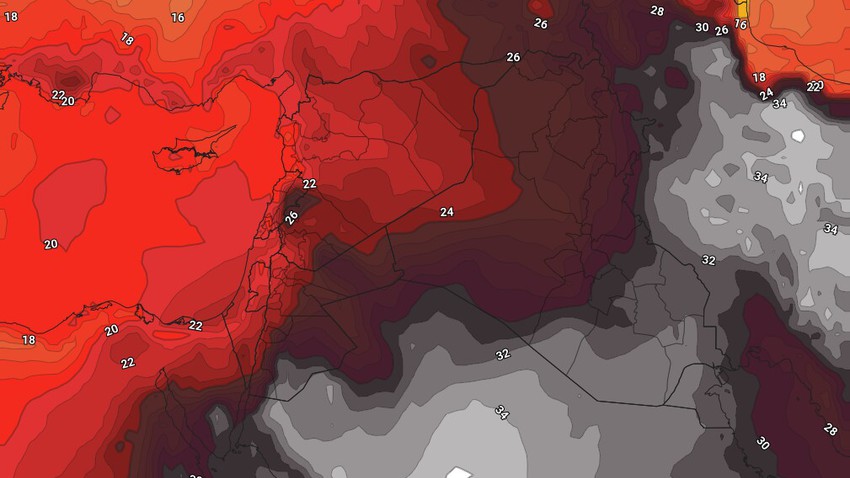 Arab weather - there is a significant decrease in temperatures on Friday to be higher than their rates for this time of the year by about 4 degrees Celsius, and the weather is hot to very hot in all regions, so that temperatures approach the end of the 40 degrees Celsius in some cities and southern neighborhoods, and appear Clouds at medium and high altitudes.

Winds will be northwesterly, light to moderate, active at times, and work to raise dust and light dust in some areas.

An additional drop in temperatures Saturday

There is an additional drop in temperatures to be slightly higher than their rates for this time of the year, and the weather is generally hot, very hot in some central and southern regions, with temperatures approaching the end of 40 degrees Celsius in some cities and southern neighborhoods, including Basra, and clouds appear At medium and high altitudes.

Winds will be northwesterly to northwesterly, moderate in speed, active at times, and work to stir up dust and dust in some areas, especially the southern ones.

There is a clear decrease in night temperatures compared to the previous nights, and the weather at night hours is pleasant in the western regions, and pleasant to relatively cold in the northern highlands, relatively hot in the rest of the regions so that temperatures are around 30 degrees Celsius in the capital, Baghdad during the late night hours, With the appearance of clouds at medium and high altitudes.

Iraq - updated at 4:50 pm | The effect of depression and thunderstorms continued in many areas

Iraq - Updated at 9:20 am | A cold front and thunderstorms in many areas will intensify in the coming hours