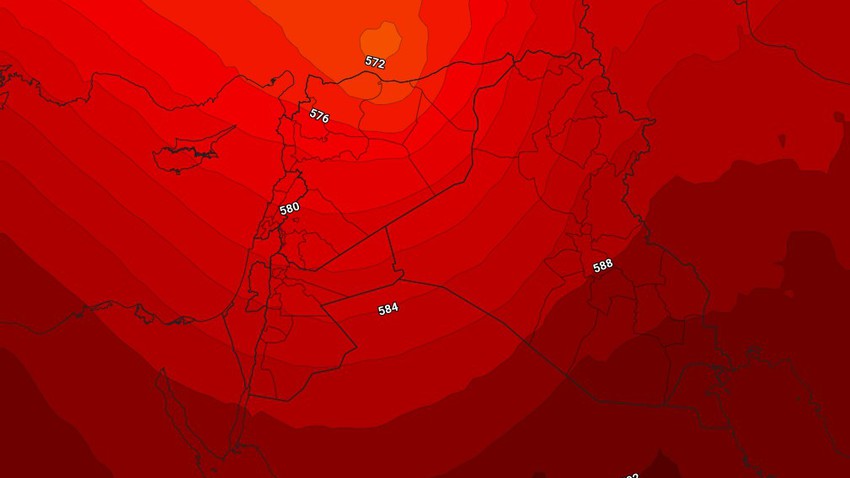 Arab weather - the latest outputs of the numerical models received at the Arab Regional Weather Center indicate that another rise in temperatures occurs on Friday to become slightly higher for this time of the year, and the weather will be hot in the western regions, and very hot in the rest of the regions, coinciding with the appearance of clouds over Medium and high altitudes, and there is a weak possibility of local thunderstorms showers of rain in limited parts of the northern mountains in the border areas.

Heat intensified on Saturday and thunderstorms in the northern regions

There is another rise in temperatures on Saturday, to become the highest rates for this time of the year by about 6 degrees Celsius, and the weather is very hot in all regions, and quantities of clouds appear at medium and high altitudes, interspersed with cumulus clouds in the far northern regions that rain showers from Rain during the afternoon hours in separate parts, the rain may be heavy at times in some narrow geographical areas and accompanied by the occurrence of thunderstorms.

Temperatures exceed the mid-forties in Baghdad on Saturday

Active winds and dust waves are expected on Saturday

On Saturday, winds of variable direction and light to moderate speed will blow over Iraq, sometimes active and causing dust and dust in some northern and western regions.

On Saturday, however, the winds will be northwesterly to southeasterly moderate, active at intervals and accompanied by strong gusts, stirring dust and dust in many areas, including the capital, Baghdad, and may lead to the formation of dust waves locally, in addition to the progress of dust waves transmitted from Badia Al-Sham, especially in the northern regions, which causes a decrease in the range of horizontal visibility.