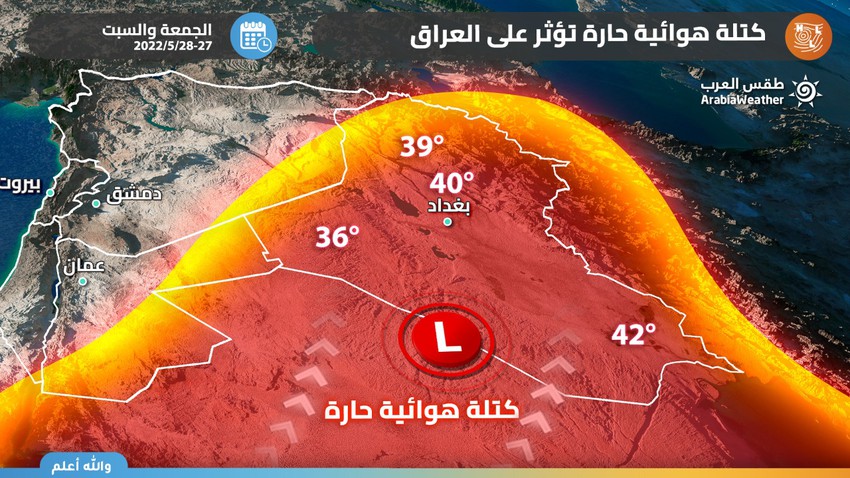 Arab Weather - The latest output of the numerical models processed by the Air Operations Department at the Arab Regional Weather Center indicates that Iraq is affected, as of Friday, by a hot air mass associated with a shallow temperature depression, so there is a clear rise in temperatures to be at their highest rates for this time of the year, and the weather is hot Relatively in the northern mountains, hot in the northern and western regions, and very hot in the rest of the regions, coinciding with the dispersal of clouds at medium and high altitudes.

The effect of the hot air mass intensified Saturday

The effect of the hot air mass increases on Saturday, and another rise in temperatures occurs to be several degrees higher than their rates for this time of the year. The weather is relatively hot in the northern mountains, while it is hot to very hot in the rest of the regions, especially in the central and southern regions. With clouds dispersed at medium and high altitudes.

Maximum temperatures are between the mid-to-late thirties in the northern and western regions, while they are around the forties in the central and southern regions, including the capital, Baghdad.

On Friday and Saturday, variable winds will blow in northerly direction, light to moderate speed, active at times and be dusty in limited areas when active.

Night temperatures rise remarkably during the weekend compared to previous nights, and the weather is pleasant to cold in the northern mountains at the late night hours, while it is relatively hot in the rest of the regions, but tends to be moderate at late night hours and dawn in the western regions.