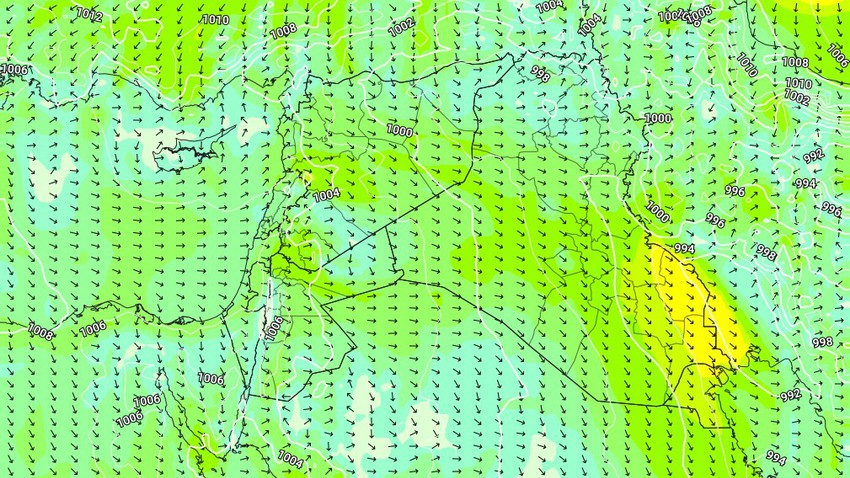 Arab Weather - The latest output of the numerical models received at the Arab Regional Weather Center indicates that temperatures on Friday will remain about 4 degrees Celsius higher than their averages for this time of the year, and the weather will be hot in the western regions, and very hot in the rest of the regions.

Temperatures will return to a temporary drop on Saturday

There is a temporary drop in temperatures on Saturday to become slightly above their averages for this time of the year, and the weather will be hot in the western regions, and very hot in the rest of the regions.

Temperatures touch the mid-forties in Baghdad on Friday

Active winds that raise dust and dust, and maybe dust waves at the end of the week

At the end of the week, moderately fast northwest to northwesterly winds will blow over Iraq, active at intervals in many areas, especially the western and central regions, including the capital, Baghdad. They cause dust and dust, and perhaps dust waves, while the winds are strong in the southern and eastern regions, accompanied by strong flashes that touch a barrier. The 80 km/hour lead to the formation of dense dust waves in those areas, and the waves on the shores of Basra port rise to more than a meter sometimes.

Hot weather continues through the weekend

Night temperatures remain high, and the weather is hot during the night hours, but it will tend to moderate in late times of the night and during dawn in parts of the western regions in addition to the northern mountains.