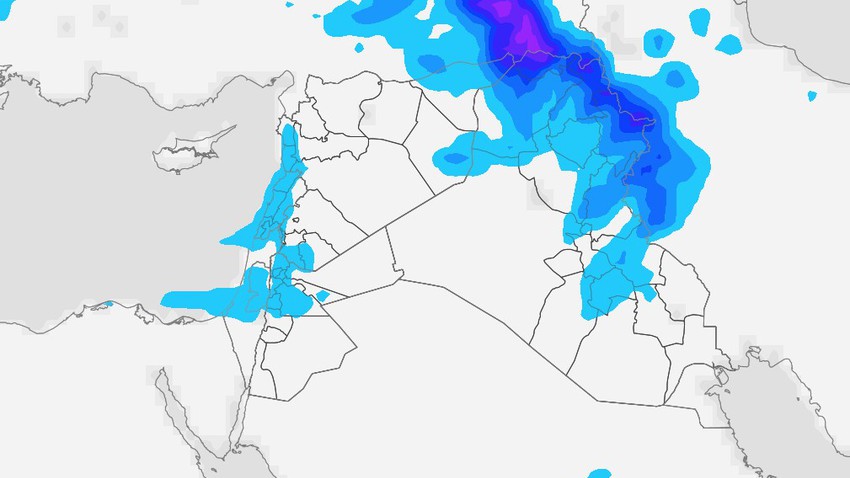 Weather of Arabia - Iraq continues to be affected by the cold and rushing air mass during the weekend from the Levant, where the weather remains relatively cold during the day and remarkably cold at night in general, but it is very cold in the mountainous heights, with the formation of frost and snow in those areas.

Continued rain and snow during the hours of the day on Friday, and the gradual stability of the atmosphere at night!

Heavy rains continue to fall in the north and northeast of Iraq during the hours of the day on Friday, especially in the early morning hours, with the rain sometimes extending to other regions, and the rains are in the form of heavy and accumulated snow in the northern mountainous highlands, with less chances of rain and snow in the hours of Friday night Saturday, and a return to the gradual stability of the atmosphere, with the remaining opportunities for light rain in some areas on Saturday.

Dense fog covers including the capital, Baghdad, at dawn on Saturday!

Humidity increases significantly during the hours of Friday / Saturday night, with a decrease in temperatures and a calm in wind speed, as fog forms in many and dispersed regions of Iraq, and fog is dense in some areas, and fog forecasts, including the capital, Baghdad, during the dawn hours of the day Saturday, God willing.

It is also expected that the so-called frozen fog will form in the northern mountainous highlands, and frozen fog is an atmospheric phenomenon that occurs when fog forms and temperatures are below freezing, as the water crystals forming fog turn into ice on the surfaces.