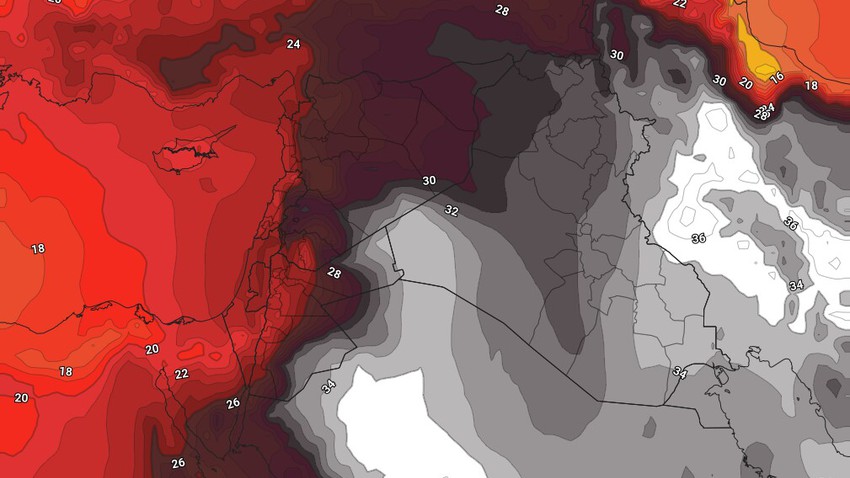 Arab Weather - the latest outputs of the numerical models received at the Arab Regional Weather Center indicate a rise in temperatures on Friday to be 3 degrees Celsius higher than their rates for this time of the year, and the weather will be hot in the western and mountainous regions, and very hot in the rest of the regions, There is a gradual increase in the proportion of dust in some northern and central regions, especially the southern ones, so that the weather becomes dusty with varying intensity.

The country is increasingly affected by a very hot air mass with a flaming center, so there is a clear rise in temperatures on Saturday to be 7-8 degrees higher than their rates for this time of the year, and the weather is very hot and exhausting in all regions, and there is a gradual increase in the proportions of dust In the northern, central, and especially southern regions, the weather becomes dusty to varying degrees.

There is another significant increase in the night temperatures during the weekend compared to the previous nights, and the weather is very hot and muffled in all areas, while the weather is hot in the mountainous areas.

Winds will be northwesterly, moderate to active, with speed over many areas, accompanied by strong gusts exceeding the 60 km/h barrier in the central, southern and eastern regions, and working to raise dust and dust, including the capital, Baghdad, and the southern and eastern regions are affected by dust waves that significantly reduce horizontal visibility. , while the winds are variable in direction and light to moderate in the west, energizing at times and raising dust and dust.