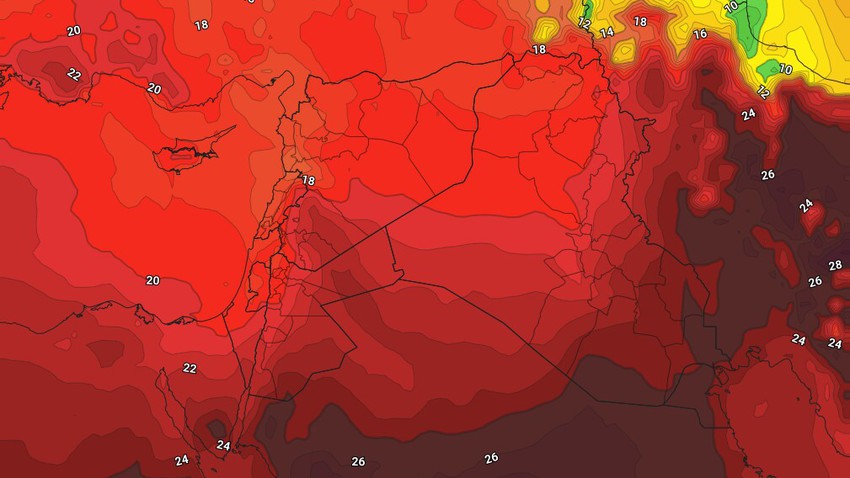 Arab weather - Iraq is affected by the hot air mass on Friday, so there is a further rise in temperatures to become higher than their normal rates for this time of the year by about 9-10 degrees Celsius, and the weather is very hot in the central and southern parts, and relatively hot to hot In the rest of the regions, with the exception of the northern mountainous highlands, temperatures approach the 40 ° C barrier in the capital, Baghdad, with clouds appearing at medium and high altitudes, and thunderstorms of rain are possible in parts of the northern and northeastern highlands, and rain is accompanied by a great activity at wind speed The surface winds in the event they occur, and the winds will be westerly to northwesterly moderate in speed. They are sometimes active over large areas of Iraq and raise dust and dust when they are active.

The weather at night is gentle in the northern and western regions, and moderate to warm in the rest of the regions, with the exception of the northern mountainous highlands where the weather is cold, and the appearance of medium and high clouds continues and the opportunity remains ready for showers of rain in parts of the northern highlands, and the winds will be westerly to northwest Light to moderate speed, it is active sometimes in some areas, especially the western ones.

A drop in temperatures on Saturday, with a noticeable increase in wind speed

A clear drop in temperatures occurs on Saturday, while remaining higher than their normal rates for this time of the year by about 5 degrees Celsius, and the weather is very hot in the southern regions, hot in the central regions, and moderate to relatively hot in the rest of the regions with the exception of the northern mountainous highlands. The clouds are at different heights and the northern and northeastern regions continue to be affected by a state of atmospheric instability, where thunderstorms of rain fall, the rains are of varying intensity and it is not excluded that the rains are sometimes heavy and accompanied by active winds, and the winds are westerly to northwesterly moderate for speed activity, and are accompanied by With strong gusts that reach speeds of more than 60 km / h, especially in the western regions, which causes the formation of dust waves and a high concentration of dust in the atmosphere.

The following map represents computer modeling of precipitation predictions, which is available via the Badr Numerical Modeling System.

1- Be aware of the risk of a reduced horizontal visibility due to the excited dust and dust.

2- The high level of water in the northern regions as a result of thunderstorms.

3- Attention to the risk of complications for respiratory and eye patients due to the increase in the proportion of dust and dirt in the air.