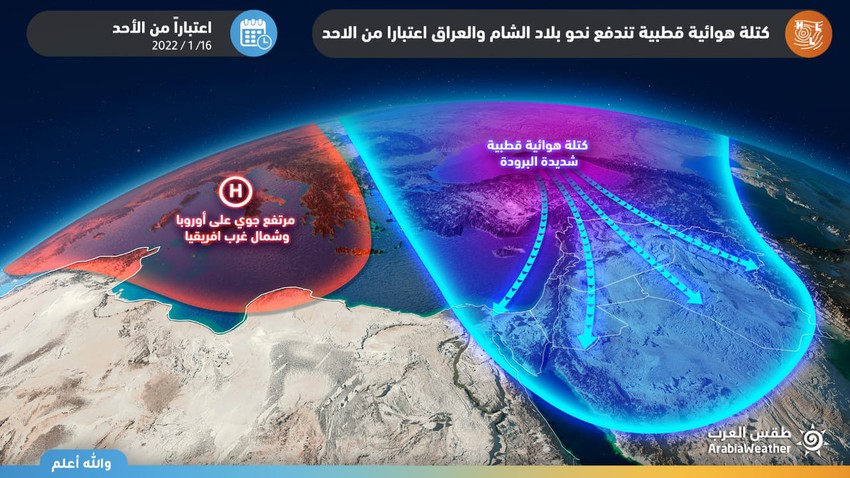 Arab Weather - The latest output of the numerical weather models processed by the Air Operations Department at the Arab Regional Weather Center indicates the occurrence of important weather fluctuations in Iraq early next week, represented by the crossing of a cold air front that rushes a very cold Siberian polar air mass, starting from Sunday and for several days, amid expectations of precipitation. Snow in areas that rarely witness snow, followed by a wide wave of ice. Details

A cold air front crosses the morning and Sunday morning, with very cold Siberian winds rushing behind it

The Arab Weather Center expected that Iraq will cross as of Sunday morning and during the day, a cold air front with very cold Siberian polar winds rushing behind it, so there is a significant drop in temperatures, especially in the western and northern regions, and the weather becomes very cold in the northern heights, and very cold in The north and west of the country, while it is relatively cold to cold in the rest of the regions.

The cold air front begins to cross from the northern and western regions during the morning and Sunday morning, pushing large amounts of rain clouds that coincide with the beginning of the flow of polar winds, and showers of rain fall on the north and west of the country. Low and in contact with the earth's surface, it forms dense fog.

Snow over the mountainous heights that rise 800 meters in the north, and rare snow showers in western Iraq

With the crossing of the cold air front and the flow of polar winds in the layers of the atmosphere in a way that allows snowfall to occur, it is expected, God willing, that the dense and accumulated snow will fall over the northern mountainous heights, which are more than 800 meters above sea level, on Sunday.

It is also expected, by will, as a rare weather event, that areas in western Iraq will witness snowfall during the crossing of the cold air front. The snow is dense and accumulated, and includes, including the western humid areas such as Mahfoor Al-Jundi, and also includes desert roads such as the Baghdad International Road in addition to the Trebil border crossing. Snow expected on the west is rare because these areas are not accustomed to receiving snowfalls.

With the night hours of Sunday / Monday, the crossing of the cold air front moves to the central regions, and heavy rains and heavy hail continue to fall on the northern regions, with heavy and accumulated snow falling over the northern mountainous heights, while rainy clouds also move to the central regions, including the capital, Baghdad, as the front crosses Cold air, where showers of rain and hail fall over central Iraq, and the chance of snow showers over the western regions remains, coinciding with the crossing of low clouds touching the surface of the earth leading to the formation of thick fog.

With the cold air front crossing the central regions, the weather forecast staff at the Arab Regional Weather Center is expected to deepen the influence of the very cold Siberian polar air mass and be stationed over Iraq on Sunday/Monday night, leading to the flow of cold northwestern winds as temperatures drop sharply and tangibly to become Temperatures are below zero degrees Celsius in large areas of western and northern Iraq, and the roads are still wet, which leads to the formation of a large-scale ice wave over those areas. The ice formation includes internal and external roads in cities, which poses a real danger when walking on the roads, while the rest of the areas witness severe weather. Cold and temperatures are very low, reaching only 3 degrees Celsius in the capital, Baghdad, while they are slightly higher in the southern regions. 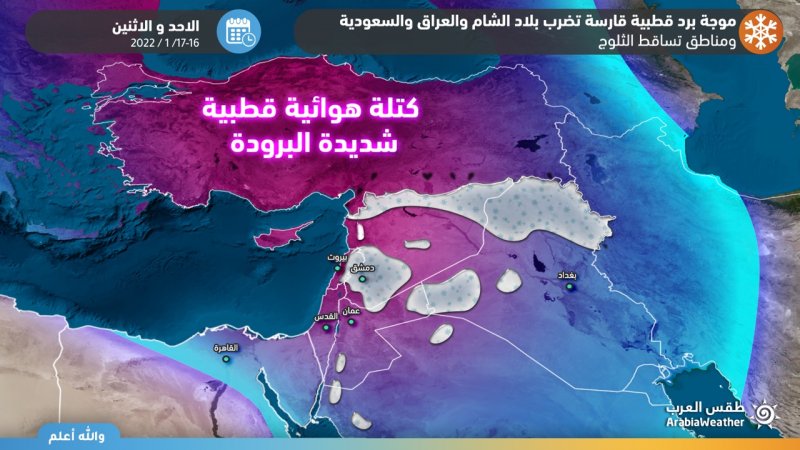 The control of the very cold Siberian polar air mass over Iraq, Monday

It is expected, according to the latest outputs of numerical weather models, that the impact of the very cold Siberian polar air mass will deepen on Iraq on Monday, as there is a sharp drop in temperatures to be below rates for this time of the year, where temperatures range between 4 and 10 degrees in most regions of Iraq. It will be below zero degrees by several degrees in the northern mountains, and the weather will be very cold in the northern highlands, and very cold in the rest of the regions, with ice forming on the roads that witnessed snowfall, especially in the morning hours.

Clouds continue to appear at different altitudes, especially in southern and eastern Iraq. Showers of rain and hail fall on the eastern and southern regions, and snow falls on the northern and northeastern mountainous heights as a result of the remnants of the cold air front that crossed later.

Winds will be northwesterly moderate to brisk, accompanied by strong gusts exceeding the 50 km/h barrier and significantly increasing the sense of cold.

With freezing forming in large areas of the country, and ice forming on wet roads amidst unusual for Iraq and Siberian polar temperatures par excellence.

The weather forecast staff at the Arab Weather Center monitors the possibility of a frigid Siberian polar air mass rushing towards the country after the middle of the week, bringing with it very cold weather and renewed rainfall and possibly snow, especially over the northern peaks, and Arab Weather will provide you with all the details later.