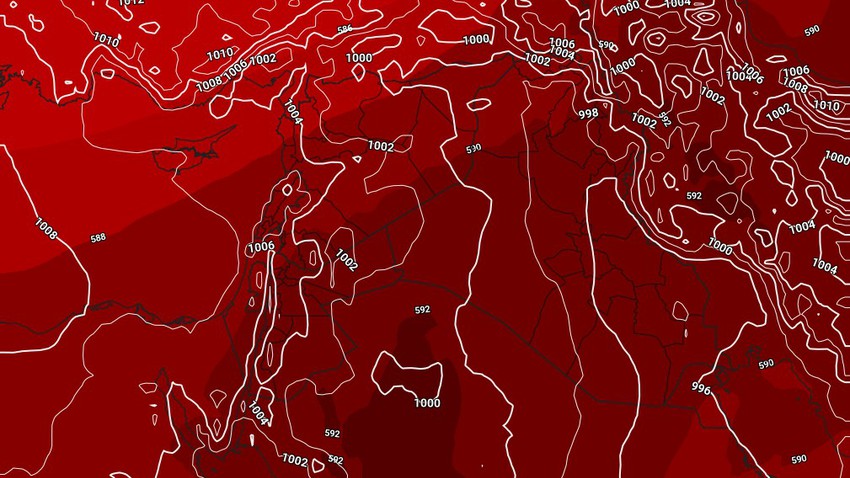 Arab Weather - The latest output of the numerical models processed by the Air Operations Department at the Arab Regional Weather Center indicates that temperatures will remain slightly higher than their rates on Sunday, and the weather will be very hot in all regions, especially in the central and southern regions.

A hotter air mass starts Monday, and its effects increase Tuesday and Wednesday

As of Monday, the country is affected by a hotter air mass with a flaming center, so there is a rise in temperatures in all regions, especially with the middle of the week, to be several degrees Celsius higher than their rates, and the weather becomes hotter and more flaming in all regions during the periods of noon and afternoon specifically, especially in Central and southern regions.

It is expected that the maximum temperatures during the influence of the air mass will be the hottest in the western regions between the early and mid forties Celsius, while exceeding the mid forties in the northern regions, while the central and southern regions will have the most impact, as the great touches the end of the forties Celsius in the central regions, including the capital, Baghdad. It may exceed that sometimes in some areas, and finally the southern regions will be below 50 degrees.

Western winds continue to blow on the northwest, moderate speed, sometimes active, especially in the afternoon and afternoon, and they are accompanied by strong gusts that raise dust and dust and may work to form some local dusty waves, especially in the middle of the week, specifically on the northern, central and southern regions, and lead to low horizontal visibility. .

It is expected, God willing, that night temperatures will tend to rise further in the coming days, especially in the middle and south, and the weather will be very hot and annoying over all regions during the night hours.