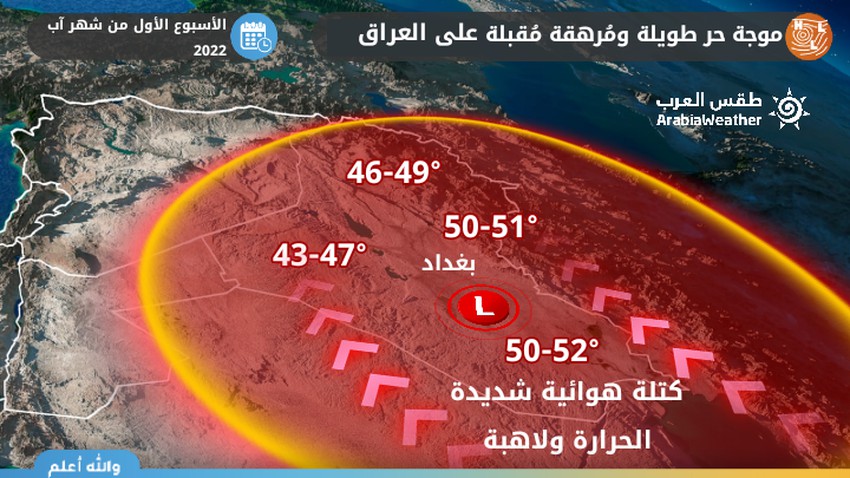 Arab Weather - The latest output of the numerical models processed by the Air Operations Department at the Arab Regional Weather Center indicates that Iraq was affected by a strong and exhausting heat wave long in its impact resulting from the progress of a very hot air mass accompanying the extension of the seasonal India depression, starting from Sunday and Monday, so that a gradual rise occurs over the Temperatures to be higher than their averages, and very hot weather prevails in general, and the possibility of thunderstorm local showers of rain remains in very limited parts of the southernmost regions on Sunday.

It is expected, God willing, that the effect of the heat wave on Iraq will intensify, starting from the middle of the week and for several days, and there will be more rises in degrees in most regions of Iraq to be much higher than their rates for this time of the year, and the weather will be flaming and exhausting in all areas, and clouds appear at heights Medium and high.

With the deepening of the seasonal depression and the very hot air mass from the middle of the week, it is expected that the maximum temperatures will range during the heat wave: 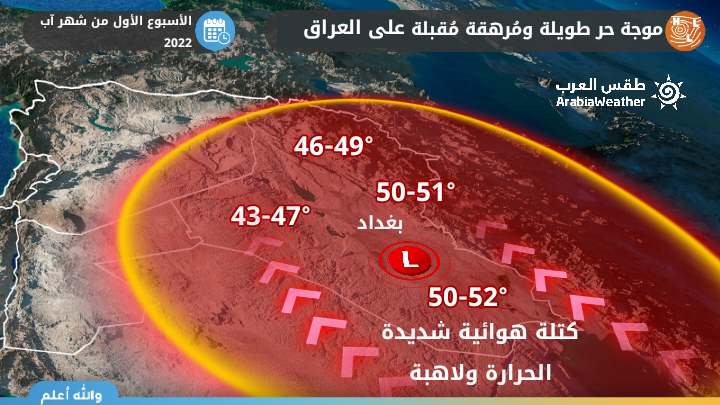 Western regions: from 43 to 47 degrees Celsius, especially the eastern parts of western Iraq.

Northern regions: from 46 to 49 degrees Celsius, especially after the middle of the week.

Central regions: from 50 to 51 degrees Celsius, including the capital, Baghdad.

Southern regions: from 50 to 52 degrees Celsius.

With the need to note that some parts may record temperatures higher or slightly lower.

It is expected, God willing, that the night temperatures will tend to rise gradually and increasing during the current week, and the weather will be very hot and annoying at night in all regions, as the temperatures will be around the forties Celsius at the midnight hours, and despite the high temperature, the humidity levels rise, especially in the southern regions, which increases Sensation of heat and malaise.

Light and choppy winds increase the sensation of heat

A variable direction and light-speed winds blow over Iraq, increasing the sense of heat, becoming moderate in some areas and active for some time in some parts, especially the northern ones.