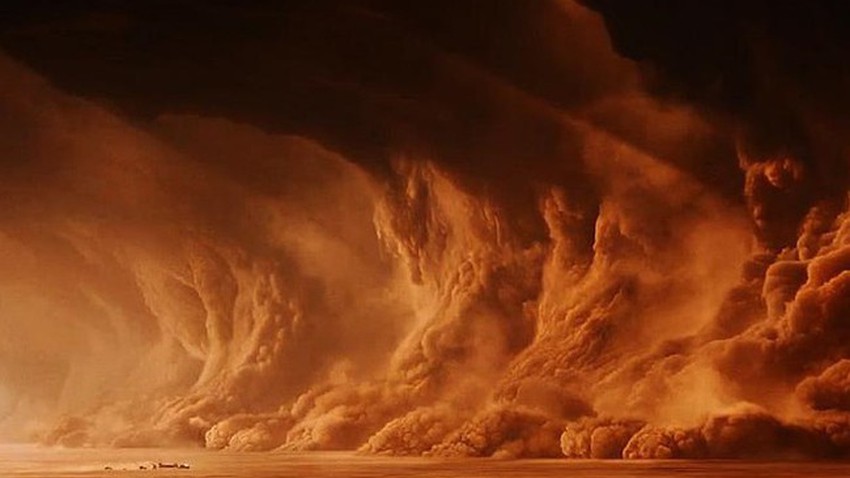 Arab Weather - The latest output of the numerical models processed by the Air Operations Department at the Arab Regional Weather Center indicates that Iraq was affected on Sunday by a hot air mass, so there is a significant rise in temperatures and the weather is hot in the northern and western regions, and very hot in the rest of the regions during the noon hours In the afternoon, temperatures will be around forty degrees Celsius in the central and southern regions, with the appearance of clouds at different altitudes.

A noticeable and temporary drop in temperatures Monday

The effect of the hot air mass recedes from the country on Monday, as temperatures drop and the weather is mild in the northern mountains, warm in the northern and western regions, and relatively hot to hot in the rest of the regions, but it will remain very hot in the far southern regions.

Active winds and a heavy sandstorm Sunday and Monday

On Sunday, brisk winds will blow over Iraq, starting from the western regions. It will form a sandstorm, starting from the western regions, beginning to gradually expand with the hours of Sunday night / Monday towards the northern regions, and the sandstorm will expand with its intensification significantly on Monday towards the rest of the central and southern regions, including The capital, Baghdad, where the weather is heavily dusty and there is a significant decrease in horizontal visibility that may reach the point of non-existence, coinciding with strong winds.

But on Tuesday, the intensity of the sandstorm recedes and moves towards the Arabian Gulf, but the weather remains dusty in many areas, especially the northern ones, and moderate northwest winds continue to blow, active at times and causing dust and dust for the rest of the week.

Warmer than usual weather most nights of the week

God willing, it is expected that night temperatures will remain high compared to the previous nights in the coming days, especially in the middle and the end of the week, when the weather will be warmer than usual relative to the evening and night hours over many areas, especially in the central and southern regions, but the weather will tend to moderate at the late night hours. And dawn in some northern and western regions, while the weather tends to be cold to relatively cold in the northern mountains over the coming days at late night hours.

According to the latest outputs of the numerical models, it is expected that cumulus clouds will continue to form over parts of the northern mountains in the border parts, and the opportunity is ripe for precipitation in parts of parts of those areas in the coming days, it may be snowy over some high peaks sometimes.

Iraq: very hot weather and a decrease in dust levels in the atmosphere from the central regions during the weekend