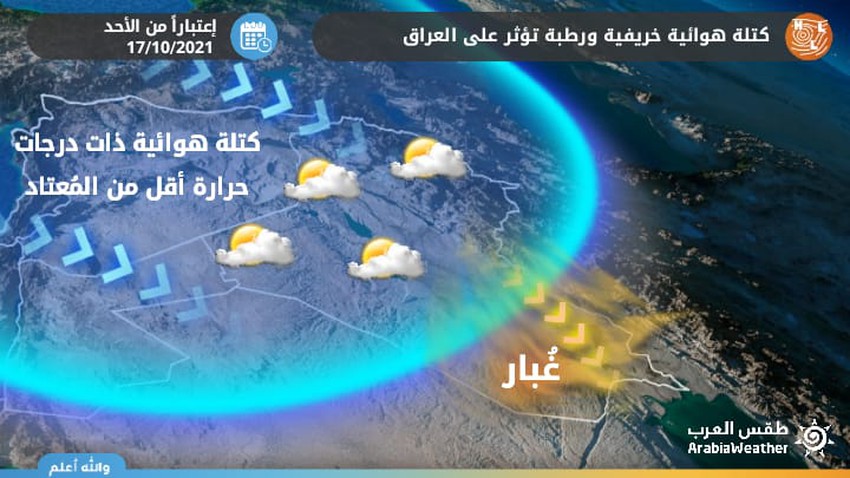 Arab Weather - The latest output of the numerical weather models processed by the Air Operations Department at the Arab Regional Weather Center indicates that the country is affected by a wet autumn air mass, starting from Sunday and during Monday and Tuesday, so there is a significant decrease in temperatures to become lower than their rates, and the weather is moderate. In the western and northern regions, it is relatively hot in the rest of the regions, with the appearance of amounts of clouds at different altitudes, especially in the northern and western regions.

The country is increasingly affected by a wet autumn air mass, as of Wednesday

It is expected, God willing, that the country will be affected by a humid autumn air mass with temperatures lower than what is used to it, starting from Wednesday and during Thursday, so that there will be a further decrease in temperatures to be several degrees lower than their rates for this time of the year, and the weather will be humid Mild in the northern and western regions, moderate to relatively hot in the rest of the regions, with the appearance of clouds at different altitudes.

Chance of scattered showers in some areas

With the increase in the amount of clouds in the atmosphere, there is a possibility of sporadic showers of rain in parts of the country, especially the northern ones at the beginning of the week, and the chances of rain showers continue in the second half of the week, God willing.

Temperature below 12 degrees Celsius over western regions at night

Minimum temperatures are around 12 degrees Celsius over the western regions, while temperatures range between 12 and 20 degrees in the rest of the regions, including the capital, Baghdad, and are below that in the northern mountains.

Refreshing westerly to northwesterly winds will blow over the country in the coming days, with moderate speed, sometimes active and accompanied by strong gifts in some areas, especially the southern ones, working to raise dust and dust, and contribute to increasing the feeling of coldness, especially at the late night hours.

Iraq | An extension of the air depression to the northern regions brings a drop in temperatures, heavy rain and snow over the towering peaks on Wednesday