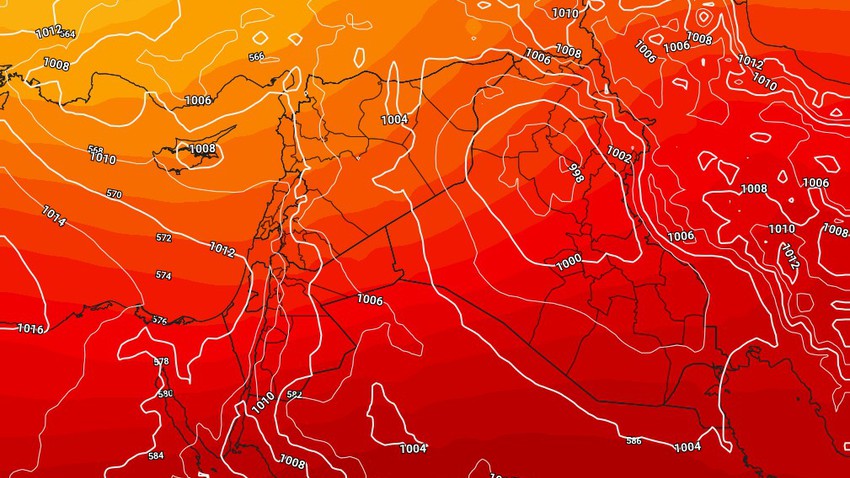 Arab Weather - The latest output of the numerical models processed by the Air Operations Department at the Arab Regional Weather Center indicates that Iraq is increasingly affected by a Khamasini air depression on Sunday, but temperatures tend to decrease in the northern and western regions, while they rise in the rest of the regions, and the weather is pleasant to moderate. In the northern mountains, warm in the northern and western regions, and relatively hot to hot in the rest of the regions during the afternoon and afternoon hours.

Southeasterly to northwesterly moderate to brisk winds, accompanied by strong gusts that form dense dust waves in many areas, including the northern regions and the capital, Baghdad, which leads to a significant decrease in the horizontal visibility and may reach the point of absence in some areas.

A drop in temperatures on Monday, and the Khamasini depression is away

According to the latest received indicators, Iraq is affected again on Tuesday and Wednesday by a new pentathlon air depression coming across the Levant and associated with a hot and exhausting air mass, so there is a clear rise in temperatures again to touch the forties Celsius in the central and southern regions, including the capital, Baghdad, on Wednesday, and it will be The weather is hot to very hot and exhausting in general, coinciding with brisk winds blowing on Wednesday, and the weather will be dusty over many areas.

The impact of the Khamasini depression continues Thursday

On Thursday, Iraq will continue to be affected by the five-year depression, and temperatures tend to decrease, especially in the western regions, with the continuation of hot weather in many regions, especially the central and southern ones, and the activity of surface winds so that the weather continues to be dusty in varying proportions.

Night temperatures are rising, and the weather is warm at night

Unstable weather conditions and thunderstorms concentrated in the north

According to the latest outputs of the numerical models, it is expected that Iraq will continue to be affected in the coming days by unstable weather conditions, where cumulus clouds form over different parts of the north of the country, and the opportunity for showers of rain will occur in separate parts of those areas, and it is possible that some thunderstorms will extend to limited parts of the center of the country .

It is expected that the rains will be of varying intensity according to the region, and sometimes heavy in some narrow geographical ranges, accompanied by hail showers in narrow and random geographical ranges, which may lead to the formation of sudden torrents and a rise in the water level on the roads.