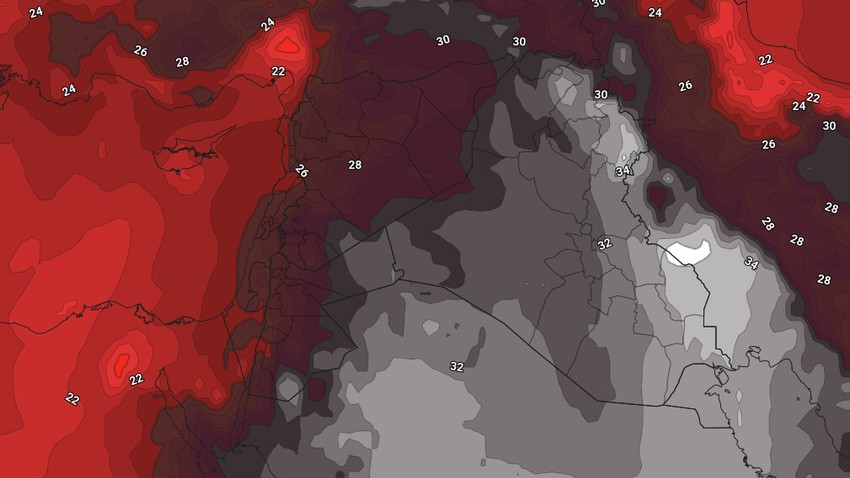 Arab Weather - The outputs of the numerical models in the Arab Regional Weather Center indicate that temperatures will remain around slightly above their rates until the middle of the week, and the weather will be hot in the western regions, and very hot in the rest of the regions, and the heat of the heat is more severe in the southern regions.

According to the initial indicators, Iraq is affected, starting from Wednesday and during the weekend, by a very hot air mass accompanied by an extension of a superficial thermal depression, as temperatures rise clearly in all regions to be higher than their rates for this time of the year, and the weather is very hot and exhausting in general, especially in the regions Central and southern parts of the country, including the capital, Baghdad.

It is expected, God willing, that the maximum temperatures will be until the middle of the week, between the mid to late thirties in the west, and in the early forties in the northern and central regions, while they will be around the end of the forties Celsius in the southern regions.

The surface-thermal depression deepens over the south of the Arabian Peninsula, which leads to the intensification of the westerly to northwesterly winds over Iraq during the coming days, especially the middle of the week, to be moderate to active in speed, accompanied by strong flashes in many areas that are exciting to dust and perhaps dust waves, which This leads to a decrease in the extent of horizontal visibility, and the intensity of northwesterly winds gradually decreases after the middle of the week.

An increase in night temperatures after the middle of the week

The weather is hot in various regions, and the weather tends to be mild in the far western regions and the northern mountains at late night and early morning hours.

However, the night temperatures rise from the middle and the end of the week, and the weather becomes hot to very hot in general, especially in the central and southern regions.