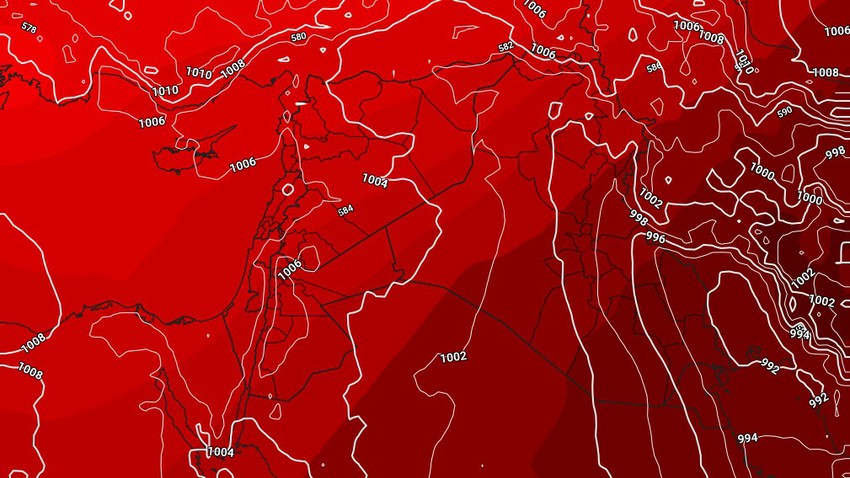 Arab Weather - The latest output of the numerical models processed by the Air Operations Department at the Arab Regional Weather Center indicates a decrease in temperatures on Sunday, and the weather will be relatively hot in the western regions, and hot to very hot in the rest of the regions, especially in the southern regions, coinciding with Reducing the effects of a state of atmospheric instability on the northern regions.

A rise in temperatures, starting Monday, especially in the west

Forty temperatures for the next days

It is expected that the maximum temperatures on the first day of the week will be around the beginning of the thirties in the western regions, becoming between the mid- and the end of the thirties for the rest of the week, while the maximum temperatures will be between the early and mid forties Celsius in the rest of the regions, including the capital, Baghdad, and touching the end of the forties in parts from the southern regions.

Westerly to northwesterly moderate winds blow over Iraq, sometimes active and accompanied by strong gusts that raise dust and dust on Sunday and lead to a decrease in the horizontal visibility. It intensifies in the second half of the week, especially towards its end, to become strong and accompanied by strong flashes that raise dust and dust intensely and form dust waves in those areas.

God willing, it is expected that night temperatures will tend to decrease compared to the previous nights in the coming days, especially in the west, where the weather will be relatively hot over many areas, especially in the central and southern regions, but the weather will become pleasant at the late night hours and dawn in some western regions and the northern mountains However, night temperatures rise with the middle and end of the week, and the weather is relatively hot to hot in all areas during the night hours.