Iraq Weekly Bulletin | Severe temperature fluctuations await the state in the coming days, and dust chances will return to rise 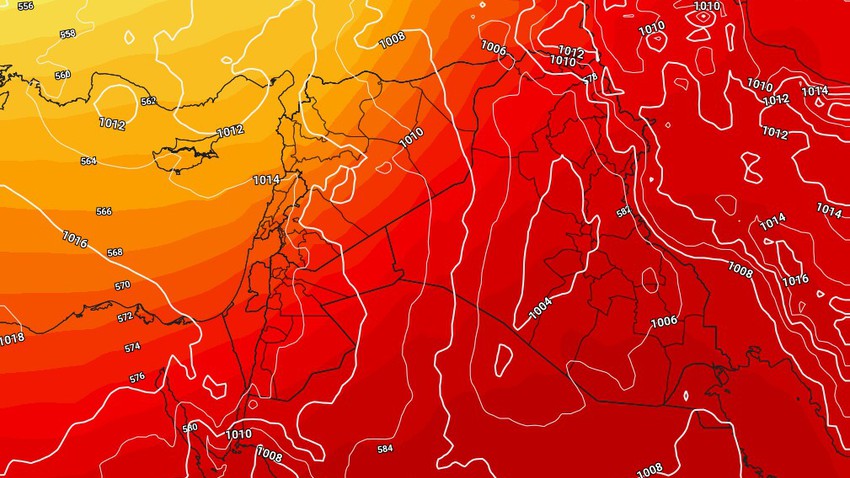 Arab Weather - The latest output of the numerical models processed by the Air Operations Department at the Arab Regional Weather Center indicates that temperatures have risen to be around slightly higher than their rates for this time of the year on Sunday, and the weather is pleasant in the northern mountains, warm to relatively hot In the rest of the regions, it blows variable direction to northwest, light to moderate speed, sometimes active over some areas.

On Tuesday and Wednesday, Iraq is affected by a five-year depression accompanied by a hot air mass, so there is a clear rise in temperatures to be much higher than their rates for this time of the year, and the weather is relatively hot over the northern mountains, and hot in the rest of the regions during the noon and afternoon hours. From clouds at medium and high altitudes, coinciding with the blowing of south to southwesterly moderate to brisk winds over the western regions, but they are accompanied by strong flashes that raise dust and dust, and these areas may be affected by dust waves.

The temperatures are around to higher than the mid-thirties of Celsius over many regions, especially the central and southern regions.

A clear drop in temperatures Wednesday, starting from the western regions

On Thursday, the weather will be mild over the northern mountains, and moderate to warm in the western regions, while it will be relatively hot to hot in the rest of the regions, with northwesterly moderate winds blowing, sometimes active and causing dust and dust.

Variation in night temperatures for the coming days

It is expected, God willing, that there will be a noticeable difference in the night temperatures in the coming days, as the weather will be moderate to warm, especially in the central and southern parts during the hours of the first part of the night, but it will tend to be cold in some northern and western regions during the late night hours and dawn, especially in the western parts. Especially after midnight, when the weather is cold in the northern mountains.