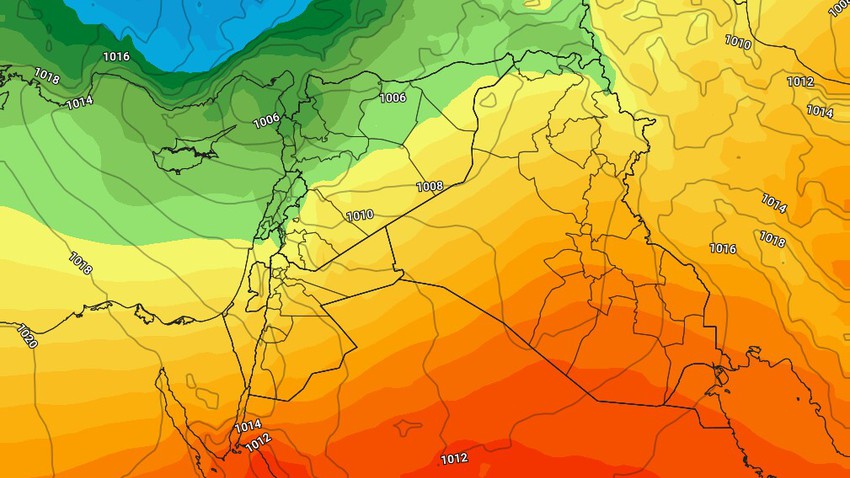 Arab Weather - The latest output of the numerical weather models processed by the Air Operations Department at the Arab Weather Regional Center indicates the control of the autumnal weather over the country in the coming days with a rise in temperatures to become higher than their rates for this time of the year as a result of the rush of an air mass warmer than usual.

The weather tends to be cold to relatively cold in the northern peaks, which becomes pleasant to cold with the victory of the week, while it is pleasant to moderate in the rest of the regions, tending to heat during the noon and afternoon periods, with the appearance of clouds at different heights in special parts in the northern regions and a limited chance of showers of rain. On parts of those areas Sunday.

Gradual rise in night temperatures until the middle of the week

There will be an increase in night temperatures during the coming nights compared to the previous nights, and the weather will be very cold in the northern mountain heights with the possibility of frost formation in some peaks at the beginning of the week, while the weather tends to be cold to relatively cold in the rest of the regions at the late night hours, with a high Humidity levels in some areas.

Minimum temperatures are less than 11 degrees Celsius over the western and northern regions, while temperatures range between 12 and 16 degrees in the rest of the regions, including the capital, Baghdad, and are much lower in the northern mountains.

Coinciding with the occurrence of a noticeable rise in surface humidity levels to exceed the 90% barrier over some areas, causing fog to form in parts of the country during some nights.

Northwesterly to variable winds will blow over the country during the coming days, be light to moderate in speed, sometimes active over some areas, working to raise dust and dust when active, especially in the southern regions.

The latest received indicators indicate that Iraq is affected by an air mass with lower temperatures that leads to lower temperatures, starting from the western and northern regions on Wednesday, passing through in the rest of the regions on Thursday, so that quantities of clouds appear at different heights, and showers of rain fall on some areas, concentrated in The northern regions, and you will be provided with more details when the time period approaches.

Iraq | A polar air front crosses the northern regions on Thursday, and heavy snow is expected