Iraq Weekly Bulletin | The flaming center of the very hot air mass intensified until Monday, and the heat declined in the middle of the week, coinciding with the rush of dust waves 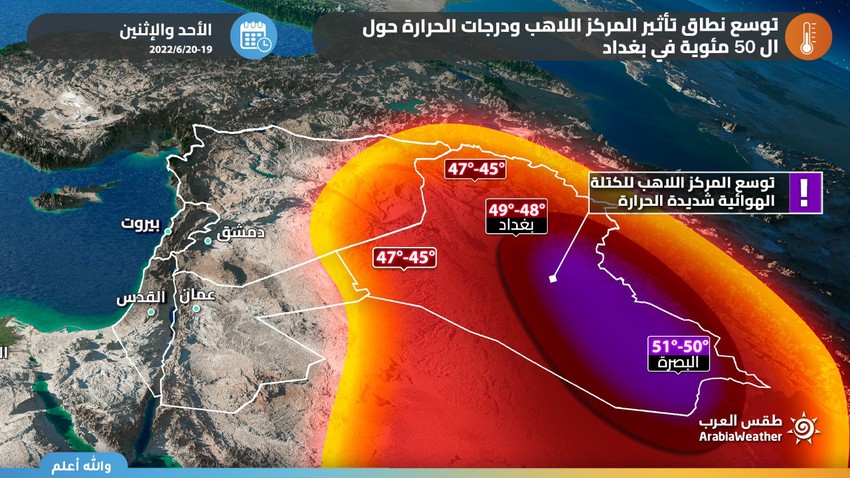 Arab Weather - The latest output of the numerical models processed by the Air Operations Department at the Arab Regional Weather Center indicates that Iraq is increasingly affected on Sunday and Monday by the flaming center of the very hot air mass, so that another rise in temperatures occurs on the day and the weather is very hot and exhausting in all regions, including regions In the western regions, there is a gradual increase in the proportion of dust, so that the weather is dusty to varying degrees, especially in the southern regions.

A drop in temperatures from Tuesday to Thursday, especially in the west

It is expected, God willing, that an air mass with lower temperatures will rush towards the Levant, which will lead to a decrease in temperatures in various Iraqi regions and cities, especially the western ones. Gradual in the proportions of dust so that the weather is dusty to varying degrees in many areas, including the capital, Baghdad, with the concentration of dust in the northern and southern regions.

Westerly to northwesterly moderate winds blow over Iraq, sometimes active and accompanied by strong gusts that stir up dust and dust in many areas. The horizontal visibility is low, and it is expected that the Al-Bawarih winds will be active in southern Iraq until the middle of the week, raising dust and dust locally and forming dust waves in those areas.

Hot weather at the beginning of the week, and the weather tends to be mild in the middle of the week