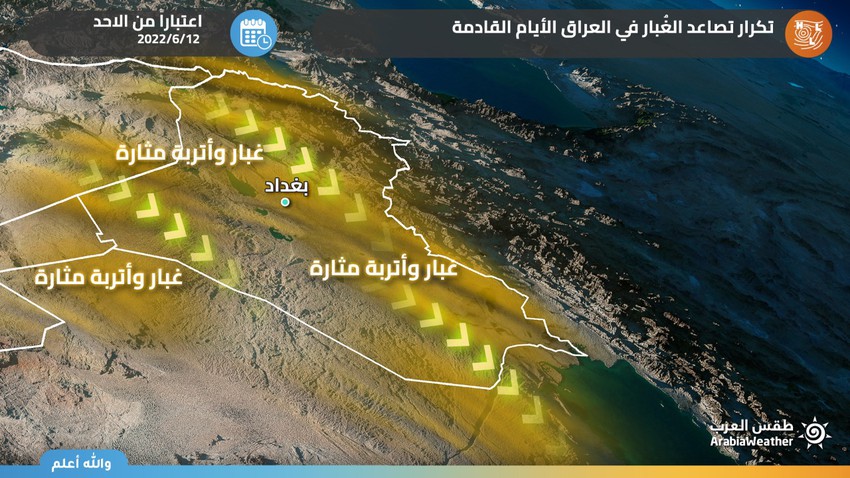 Arab Weather - The latest output of the numerical models processed by the Air Operations Department at the Arab Regional Weather Center indicates an increase in temperatures on Sunday, and the weather will be hot to very hot in all regions and dusty in varying degrees in many areas, especially with the afternoon and evening hours with The appearance of clouds at medium and high altitudes, especially in the western regions. An opportunity is created for the formation of cumulus clouds on the far northern mountains, so that local thundershowers of rain are likely in limited parts of the northernmost mountains.

A drop in temperatures Monday and Tuesday, especially in the west

It is expected, God willing, that an air mass with lower temperatures will rush towards the Levant, which will lead to a decrease in temperatures in various regions, especially the western ones. Especially in the northern regions, the opportunity remains for the formation of cumulus clouds on the northernmost mountains, so that the possibility of local thundershowers of rain remains in limited parts of the northernmost mountains.

A rise in temperatures the rest of the week Forty temperatures for the next days

It is expected that the maximum temperatures on most days of the week will be around the beginning to the mid-30s in the western regions, while they will be between the early and mid-forties in the rest of the regions, including the capital, Baghdad, and exceed the mid-forties in parts of the southern regions.

Westerly to northwesterly moderate winds blow over Iraq, sometimes active and accompanied by strong gusts that stir up dust and dust, and may lead to the country being affected by dust waves transmitted from the Badia of the Levant, starting from the northern and western regions, passing through to the rest of the regions on Sunday and Monday, and leading to low visibility. Horizontal winds, and it is expected that the Al-Bawarih winds will activate, especially in parts of central and southern Iraq, at the beginning and end of the week, raising dust and dust and forming dust waves in those areas.

Hot weather most nights of the week