Is drinking water during food harmful and causes the appearance of the rumen? 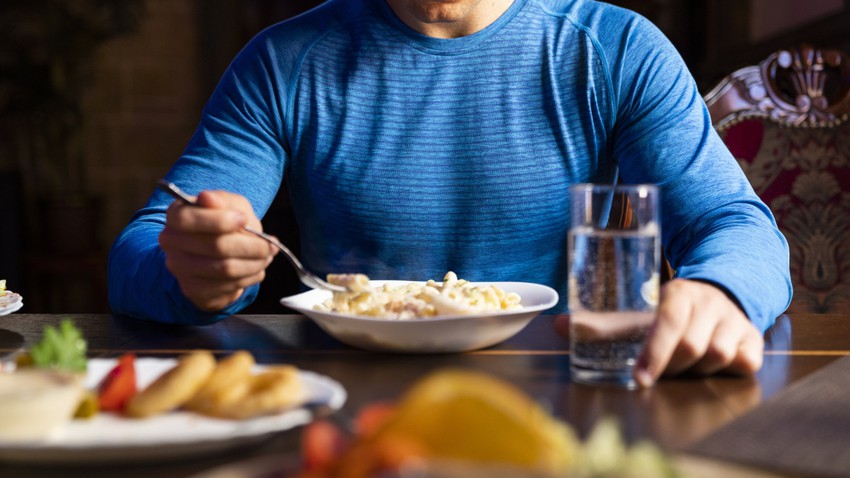 Weather of Arabia - Most of us may not be able to sit at the dining table without a cup of water next to the meal, and while drinking a few sips of water helps moisten food and facilitate swallowing, there is a belief that eating a lot of water during meals has negative effects and may cause accumulation Fat and the appearance of the rumen, what is the truth about that?

Health experts recommend drinking at least 2 liters of water per day, and this amount rises to 3-4 liters in hot weather. Water is beneficial for the skin, bowel movement, digestion, and general health.

Studies show the benefits of consuming one or two cups of water 30 minutes before or 30 minutes after a meal, however, there is a common belief that drinking water while eating has negative effects and may cause rumen, and the reason behind this is the belief that water reduces the amount of saliva In the mouth, which leads to weakening the signals sent to the stomach and thus affects the secretion of gastric juices and enzymes, or that water dilutes the concentration of gastric juice, which prevents the decomposition of food properly, and this hinders the process of digestion and absorption, which leads to the transformation of food into fat and its accumulation, and thus Weight gain and the appearance of the rumen.

Truth: In fact, research studies have not proven that drinking water during meals has negative effects, hinders digestion, dilutes stomach acid and enzymes, or can lead to weight gain.

On the other hand, we eat water with food better than eating sugary drinks (sweetened) and juices, as studies have revealed that consuming soda drinks and juices increases the total calories intake to about 8-15%, which leads to weight gain, while water is devoid of calories. Also, drinking water with meals increases the feeling of satiety, which reduces the amount of food you eat.

A study has shown that drinking at least 500ml of water about 30 minutes before meals can help you lose weight, so if you're following a weight loss diet with exercise, this trick can help you speed up the weight loss process. However, consult your nutritionist before doing so to weigh the pros and cons.

Drinking water while eating may harm some people

From the above it was found that drinking water during food is harmless and does not cause the appearance of the rumen, but some studies have shown the necessity of not drinking water and fluids during meals for people suffering from gastroesophageal reflux disease (Gastroesophageal Reflux), because fluids add volume to the stomach, which may lead to It increases abdominal pressure, which in turn can increase the risk of stomach acid reflux.

Since there are no significant research studies that have proven the negative impact of drinking water on digestion and weight gain, it can be said that it is up to you to judge whether or not you should drink water with your meals. If you experience any discomfort while taking fluids with food, it is best to drink water before or after food rather than during food, otherwise there is no need to stop drinking water with food.

However, people with GERD should avoid drinking water and liquids with food or ask a doctor to evaluate the condition, and avoid taking other forms of fluid such as juices or filled drinks with meals because they are not good for health and may lead to weight gain.

Reasons for the appearance of the rumen

As for the scientific reasons behind the appearance of the rumen, the most important of them are the following:

You may also be interested in: How does the sun's rays affect mental health and human mood

You may also be interested in: The relationship of the color of eggs to the nutritional value and other nutritional myths that have been associated in our minds... What is the truth about them?