Is the implementation of daylight saving time useful in Jordan? 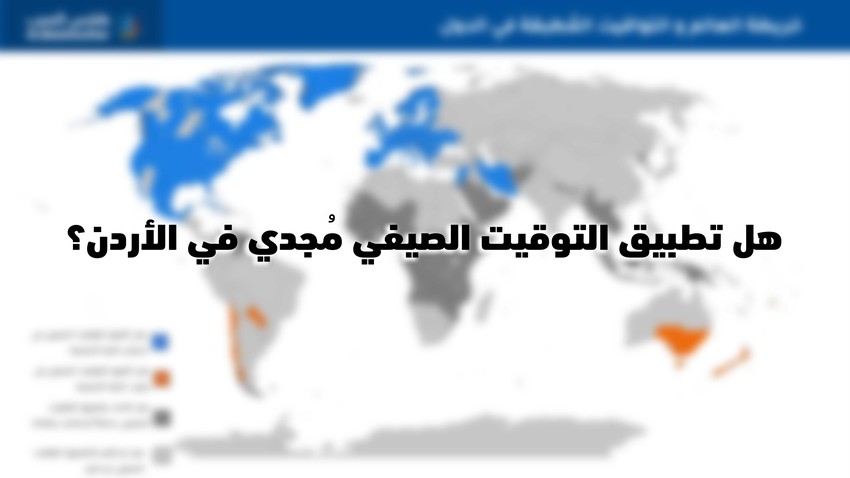 Arab Weather - The official Hashemite Kingdom of Jordan time, which corresponds to the longitude on which the Kingdom is located, is 2 + UTC, meaning that it is two hours more than UTC, and this time is known locally as winter time

Daylight savings time , or what is known as the provider for daylight Saving Daylight is to carry out an additional increase of an hour on the original timing of the country, in the case of Jordan , the Kingdom becomes the timing of summer is 3 + UTC that any increase in 3 hours Coordinated Universal Time Unified UTC.

The theory behind the implementation of daylight saving time is to make more use of daylight during work hours in the spring and summer , and thus reduce energy consumption (this timing does not achieve the same result in the winter season because the number of daylight hours is inherently very short)

The benefit from daylight saving time and energy conservation lies by advancing the clock by 60 minutes, so that the Kingdom’s summer time is 3 + UTC, and thus the sunset is apparently delayed by an hour and thus daylight remains bright for a longer time and thus energy and lighting are not consumed at the state level. The last few hours of the day are considered prime hours .

Many countries in the world apply daylight saving time, especially those whose climate has 4 distinct seasons. The map is on the next page. These countries are shown .

There are no countries that have implemented Daylight Saving Time that have a different start and end date .

It has been observed in a number of countries that daylight saving time is not applied when the month of Ramadan approaches its start date (such as the Republic of Egypt), as it is believed that the original timing of the countries is more appropriate than daylight saving time because the daily activities and peak times in Ramadan differ radically from other months and that The original time provides more productivity since the period between breakfast and suhoor becomes complete an hour earlier. The difference between sunrise and sunset between the two times in Jordan is Daylight Saving Time +3 UTC if the time change is applied as usual ) Winter Time (original) +2 UTC if change of time to Daylight Saving Time is not implemented

Is the implementation of daylight saving time in Jordan useful?

The implementation of daylight saving time in Jordan is feasible for the following reasons:

Correspondence to the timing of the Kingdom of Saudi Arabia (economic return), as Saudi Arabia is one of the largest economies of the Arab countries .

Reducing the number of hours difference between Jordan and the Gulf countries (such as the UAE) from 2 hours to 1 hour, thus resulting in better economic return and ease of work .

Daylight saving time makes the sunrise time reasonable (5:30) in the spring and summer months, while if the time is not applied, the sunrise time in the summer becomes at 4:30 and becomes early .

Daylight saving time also works to make the sunset time late (7:50) and thus make more use of daylight during peak hours , while if the timing is not applied, the time for sunset in the summer season becomes at (6:30) and becomes enlarged and He is forced to use energy to light up early.

In order not to cause confusion with the outside world, it is advisable to unify the application of daylight saving time with them, as all countries that implement daylight saving time begin at the end of March . Airlines, smartphones, exchanges, relationships and bank transfers all depend on timings .