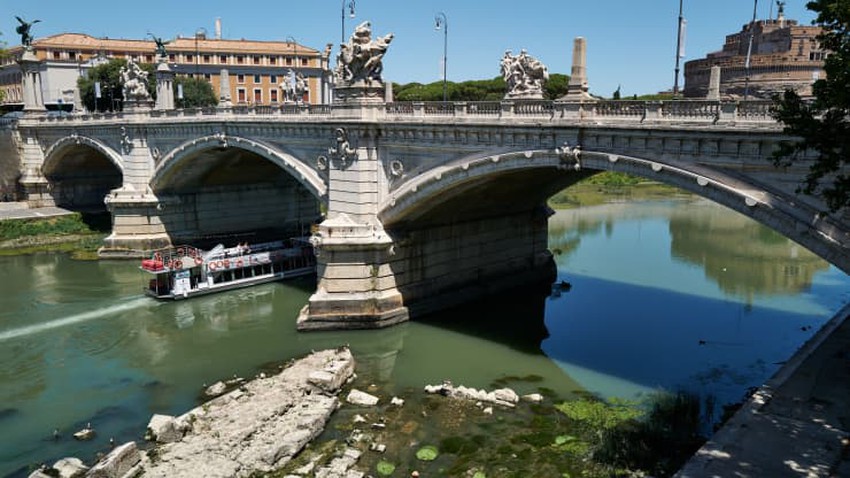 Weather of Arabia - On Monday (July 4) the Italian government declared a state of emergency in five regions due to drought caused by lack of rain and high temperatures.

Italy is facing an unusually early heat wave, accompanied by a lack of rainfall, especially in the Po River Basin, which is experiencing the worst drought in the past 70 years, according to an analysis by the Po River Basin Authority.

The Po River is Italy's longest river. It runs east through the northern part of Italy from Monviso (in the Alps) to the Adriatic Sea near Venice. About 17 million people, or a third of the total population, live in its basin.

(This photo taken on July 2, 2022 in Rome shows the low water level of the Tiber River near the Vittorio Emanuele II Bridge, revealing an ancient bridge built under the Roman Emperor Nero)

(Soybean plants in Porto Tolle, Italy, which are dying from the salty sea water flowing into the drought-stricken Po River. Photo taken on June 23, 2022)

(A barge sunk during World War II now appears on the course of the Po River, where parts of Italy's longest river and largest freshwater reservoir have dried up due to the worst drought to hit the region in the past 70 years.. June 22, 2022)

(The appearance of drought at one of the towers of the bridge that crosses the Po River in the municipality of Burrito, in the province of Reggio Emilia, Italy, on June 27, 2022)

(A man walks along the dry course of the Sangon, a tributary of the Po River, which is experiencing its worst drought in 70 years, in Peñasco, Turin, Italy, photo taken on June 19, 2022)

(The most famous fountain (Fontana dei Mesi) whose water has been shut off to avoid wasting water, in Valentino Park, Turin, Italy on June 19, 2022)

Read also: Milan's fountains closed in Italy to face one of the country's worst droughts

In a statement by Italian Prime Minister Mario Draghi, he explained that the crisis worsened after three years of drought and high temperatures, as the country had suffered from a lack of rainfall in the past three years, not only this year, and the general rise in temperatures contributed to an increase in the severity of the drought. There is no doubt that climate change is having an impact.

The announcement comes a day after at least seven people died after a glacier collapsed in the Italian Alps, which is "undoubtedly" linked to global warming, Prime Minister Mario Draghi said.

Read also: Dead and injured in an avalanche in the Italian Alps, amid unusually high temperatures

Draghi added that one of the other reasons behind the drought crisis in Italy is the loss of water from the Po River due to poor maintenance of basins and the water network, which led to water leakage and a high level of water lost in Italy by more than 30%, while it is in European countries. Other only 5--6-8%.

The Po River and its surrounding basins are important areas for agriculture and livestock, with more than half of the national livestock stock living in the region.

The drought has devastated the Italian rice crop, eliminating 30% of the total crop, according to a statement issued Sunday by the European Union's agricultural organization Coldiretti.

The destruction of the rice crop comes at a critical time for the agricultural sector, with seed plantings reduced by 10,000 hectares due to the “record increase in production costs” caused by the war in Ukraine.

Through the advanced “Weather Watch” software, you can obtain services that help reduce losses resulting from weather conditions by providing weather information and early warning for sectors that are significantly affected by weather conditions through the link ( click here )